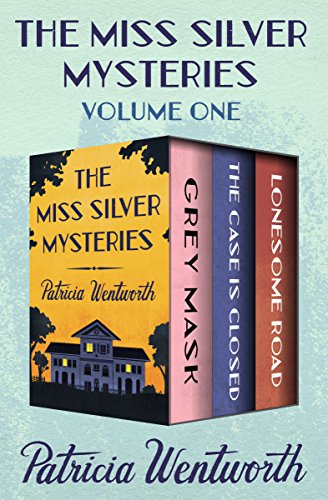 Grey Mask is the start of this series, written by Wentworth in 1928. Charles Moray leaves home after being jilted by Margaret Langton on the eve of their wedding and returns four years later to find his home open and a strange meeting taking place. Watching through a childhood hideout, he sees a man in a grey mask talking to several different people - calling each by a number. When Charles hears them discussing "removing" a girl if a "certificate" is found, he is shocked. He is even more shocked when he recognizes one of the agents - his former fiancee.

When he reads about Margot Standing, whose millionaire father dies leaving her inheritance in the balance because of a missing marriage certificate, he puts two and two together and approaches Miss Silver, a private investigator with a high success rate in missing jewelry. He is skeptical until Miss Silver astutely guesses he will not go to the police because of his former love.

The first of 32 Miss Silver mysteries published 1928-1961.
It would be 9 years before a second title was published, as Wentworth experimented with other sleuths.

Readers in 1928 would have compared Miss Silver with that "other" elderly female detective Miss Marple who made her first appearance in 1927 (in a short story). Since beginning writing in 1920 Agatha Christie had dabbled in male sleuths, and in 1927 published THE BIG FOUR, which seems to me to have similar themes to GREY MASK.

For me this was a re-read. See also audio book review.
Most of my conclusions in that review still hold. I think the style of the novel shows signs that it is nearly 100 years since it was published. I think Margot Standing is a most exasperating character, a chatterbox who would drive all of those around her mad. However I think the novel also shows a complexity of plot strands that Agatha Christie managed to avoid.

Readers' expectations of crime fiction novels have changed since this novel was published. But Miss Silver is surprisingly modern. She does a lot of investigation (in contrast to Miss Marple who relied on her experience) and is surprisingly organised with notebooks for each case that she undertakes.

I bought a Kindle edition which contains the first 3 Miss Silver titles - and I don't think I have read the other 2 before.