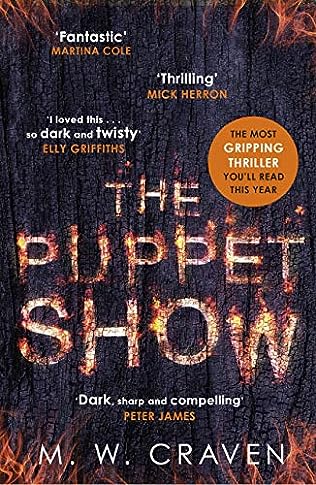 A serial killer is burning people alive in the Lake District's prehistoric stone circles. He leaves no clues and the police are helpless. When his name is found carved into the charred remains of the third victim, disgraced detective Washington Poe is brought back from suspension and into an investigation he wants no part of . . .

Reluctantly partnered with the brilliant, but socially awkward, civilian analyst, Tilly Bradshaw, the mismatched pair uncover a trail that only he is meant to see. The elusive killer has a plan and for some reason Poe is part of it.

As the body count rises, Poe discovers he has far more invested in the case than he could have possibly imagined. And in a shocking finale that will shatter everything he's ever believed about himself, Poe will learn that there are things far worse than being burned alive ...

I always advocate that readers tackle a series in order of publication, but occasionally I don't obey my own rule.

I had in fact begun reading the sequel to this novel (which kept referring to events related to the Immolation Man) when I realised I needed to seek out and read this one.

Washington Poe, disgraced and demoted detective) and Tilly Bradshaw, mathematical genius, make an interesting investigative pair. Tilly loves data and can make it form patterns which no-one else can. She and Poe make a formidable pair, each appreciating what the other has to offer.

This case is one that the perpetrator intends Washington Poe will be the one to investigate. He wants Poe brought back from demotion, re-instated to help him wreak vengeance on a crime that is over a quarter of a century old. In desperation he carves Poe's name on the chest of one of the victims.

About the author
aka Mike Craven

Although he was born in Cumbria, Mike Craven grew up in the North East before running away to join the army when he turned sixteen. After training as an armourer for two and a half years, he spent the next ten travelling the world having fun. In 1995 he left the army and completed a degree in social work, with specialisms in criminology, psychology and substance misuse. In 1999 he joined Cumbria Probation Service as a probation officer, working his way up to chief officer grade. Sixteen years later, he took the plunge and accepted redundancy to concentrate on writing. He now has entirely different motivations for trying to get inside the minds of criminals.

Between leaving the army and securing his first publishing deal, Mike found time to keep a pet crocodile, breed snakes, survive cancer and get married. He lives in Carlisle with his wife, Joanne, and his springer spaniel, Bracken.