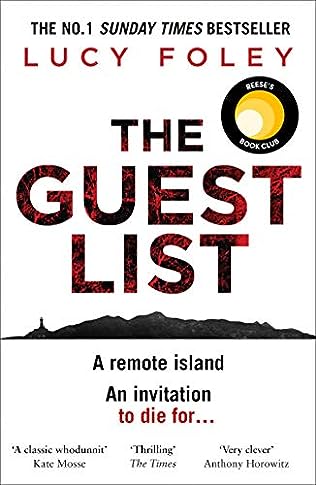 A wedding celebration turns dark and deadly in this deliciously wicked and atmospheric thriller reminiscent of Agatha Christie from the New York Times bestselling author of The Hunting Party.

On an island off the coast of Ireland, guests gather to celebrate two people joining their lives together as one. The groom: handsome and charming, a rising television star. The bride: smart and ambitious, a magazine publisher. It’s a wedding for a magazine, or for a celebrity: the designer dress, the remote location, the luxe party favors, the boutique whiskey. The cell phone service may be spotty and the waves may be rough, but every detail has been expertly planned and will be expertly executed.

But perfection is for plans, and people are all too human. As the champagne is popped and the festivities begin, resentments and petty jealousies begin to mingle with the reminiscences and well wishes. The groomsmen begin the drinking game from their school days. The bridesmaid not-so-accidentally ruins her dress. The bride’s oldest (male) friend gives an uncomfortably caring toast.

And then someone turns up dead. Who didn’t wish the happy couple well? And perhaps more important, why?

This is the thing about organising a wedding. I can put together a perfect day, as long as the guests play along, remember to stay within certain bounds. But if they don't, the repercussions can last longer than twenty-four hours. No one is capable of controlling that sort of fallout.

Sometimes we don't realise just how close we are to people.
We move "in the same circles" but don't see it.
The six degrees of separation theory states that any inhabitant of the Earth could meet anyone in the world with a maximum of six or fewer mutual connections between them and another person. Be it through acquaintances, friends, or members of their family.

Ostensibly what connects these wedding guests in the main is that they, the males at least, went to the same school, or knew each other from university days. And, in a sense they have never grown up. Several refer to what happened to them at school as being like something from The Lord of the Flies.
The female guests that we meet are mainly attached to the males. But there are some horrific threads lurking in the background, not acknowledged, all linked to one person, the one who ends up dead.

From the middle of this story, thread by thread is revealed, but the most horrendous one, the one that finally ends in murder, does not come out until the last few pages.