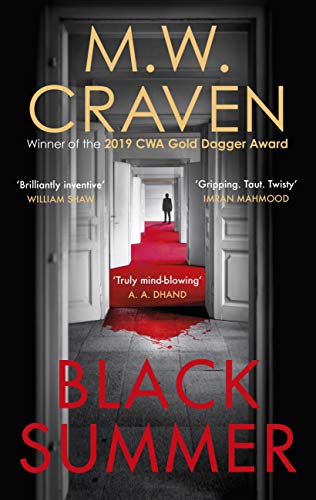 Jared Keaton, chef to the stars. Charming. Charismatic. Psychopath . . . He's currently serving a life sentence for the brutal murder of his daughter, Elizabeth. Her body was never found and Keaton was convicted largely on the testimony of Detective Sergeant Washington Poe.

So when a young woman staggers into a remote police station with irrefutable evidence that she is Elizabeth Keaton, Poe finds himself on the wrong end of an investigation, one that could cost him much more than his career.

Helped by the only person he trusts, the brilliant but socially awkward Tilly Bradshaw, Poe races to answer the only question that matters: how can someone be both dead and alive at the same time?

And then Elizabeth goes missing again - and all paths of investigation lead back to Poe.

I initially started reading this novel, and then after about 50 pages, realised that it was #2 in a series, and so located a copy of #1 (THE PUPPET SHOW). That meant that when I came back to reading BLACK SUMMER, I had already met the main characters and had some understanding of the relationship between them.

Jared Keaton has been in gaol for 7 years for the murder of his daughter.  The appearance of a young woman claiming to be Elizabeth Keaton means that his lawyers appeal for his release, particularly after a DNA test seems to confirm her identity.

The novel opens with two puzzles: the first page begins My body is eating itself. So the first puzzle is to identify this person. Chapter One ends with the arrest of Washington Poe on suspicion of murder. So there is the second puzzle to be solved.

This is one of those novels where the reader needs to take notice of the time frame given at the beginning of each chapter.

The novel brings together the team we met in THE PUPPET SHOW: Washington Poe, Tilly Bradshaw, DS Gamble, and DI Flynn. Poe is convinced that he did not get it wrong when he originally arrested Jared Keaton for murder, so there is a race against time to try to prove his case.