Review: WHEN SHE WAS GOOD, Michael Robotham 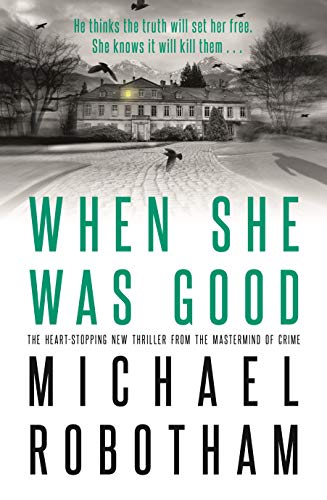 Six years ago, Evie Cormac was found hiding in a secret room in the aftermath of a brutal murder. But nobody has ever discovered her real name or where she came from, because everybody who tries ends up dead.

Forensic psychologist Cyrus Haven believes the truth will set Evie free. Ignoring her warnings, he begins to dig into her past, only to disturb a hornet's nest of corrupt and powerful people, who have been waiting to find Evie - the final witness to their crimes. Unbeknownst to him, Cyrus is leading them straight to Evie. The truth will not set her free. It will get them killed.

You really need to read the first in this series (GOOD GIRL, BAD GIRL) before reading this one.
Cyrus Haven is convinced that if he can work out who Evie Cormac really is, then they can work out who it was that treated her so badly. He teams with Sacha Hopewell, the ex-police woman who discovered where Evie was hiding 6 years before.

The novel is set in 2020, in a world where Covid-19 does not exist, mainly because it was written and dispatched to the printers before the virus hit us. (Chapter 1 where Cyrus tracks Sacha down is set in May 2020). Cyrus believes there were things not put in the police reports 6 years before that will help him give Evie her real name, although it is obvious that Evie knows who she is. He thinks these are details Sacha can help him with. Initially Sacha is reluctant to get involved, but inevitably she does.

Robotham uses mainly the two voices: Cyrus and Evie to progress the novel and the search for the truth. Evie has turned into a feisty character and is living in a correctional centre, ostensibly to protect her, but outside there are people who are trying to work out where she is, and eventually one of them does.

GOOD GIRL BAD GIRL has been shortlisted for the UK Gold Dagger.
The winners of the 2020 Daggers will be announced at an awards ceremony, due to take place on 22 October.