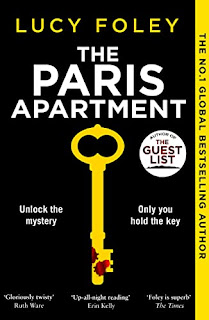 Unlock the mystery. Only you hold the key…

In a beautiful old apartment block, deep in the backstreets of Paris, secrets are stirring behind every resident’s door.

There was a murder here last night.
Who holds the key to the mystery of apartment three?

Ben's half-sister Jess is arriving from London. She talks to Ben on the phone, but when she arrives at his very exclusive apartment building three hours later the gates are locked and he is gone.

Jess manages to find her way into the building and then into Ben's apartment which she know is on the third floor.

The story focuses on Jess's search for Ben, her quest to find out what has happened to him. There are 5 apartments, plus a concierge's cabin. Ben is a journalist and Jess suspects that he is chasing a story but when she finds his wallet and the keys to his Moped she suspects foul play. She thinks perhaps the residents of the apartments know what has happened to him, but they are blocking her efforts at discovery.

Gradually Jess begins to discover what Ben has previously found out about the residents.

As with most of Foley's other books there are a couple of twists in the tale. There are multiple narratives, and a lot of juggling of past and present, just to keep the reader on his/her toes.