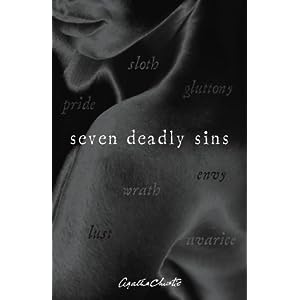 I brought a rather weighty tome home from the library today, 1158 pages, will my wrists be strong enough to hold it?

What I actually want to read is SPARKLING CYANIDE (aka REMEMBERED DEATH), but this is the only format it is available in through my library.

This anthology consists of
seven of the best Agatha Christie crime thrillers, themed around the timeless motives of Sin!
Some I have already read as you can see.
But given the weight of the volume, I may just read SPARKLING CYANIDE this time.

'At Bertram's Hotel' is a nice Miss Marple if you get the time to read it Kerrie. I haven't seen the anthology but I don't particularly like it when books are lumped together.

A sin in each book, clever. I have only read And Then There Were None and haven't decided what to read next by her, what is your favourite?

Oh wow, that does sound like a weighty tome. I have read all of them, Endless Night is definitely the most chilling. Marce, I would recommend Death on the Nile, which is glamorous and fun.