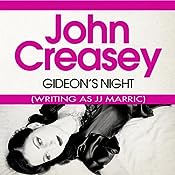 Another night, another shift for Commander George Gideon. Amidst the undertones of gang warfare, Gideon must deal with two psychopaths trailing pain and blood in their wake. One targets infants, and the other young women on London's foggy streets.

George Gideon takes his role as Commander at New Scotland Yard very seriously. He believes that it is important that those in his charge see him as a worker, someone who cares what they do. That is why he decides to work at night for a week.

And this particular night it is one incident after another: someone is snatching baby boys; there is an active prowler targetting young women and it is only a matter of time before he kills; then two of the gangs in the docklands are sizing up for an outright battle; and a young woman is concerned because her husband has been missing for a few days.

It is worth reading the two earlier books
4.4, GIDEON'S DAY
4.4, GIDEON'S WEEK
because you get a lot of background material for GIDEON'S NIGHT. These are of course police procedurals but in 1957 they were breaking new ground, personalising the job that the police do, and establishing the sort of pattern we see in later novels like Ruth Rendell's Wexford series.

Each of the cases that Gideon manages in GIDEON'S NIGHT could very well have been presented as short stories. The links between the cases are George Gideon himself and the cases themselves remain as stand-alones. In later police procedurals you would very likely find the cases linking up.

Despite the fact that this audio book was only released in 2010, technically it is not a particularly good production. The narrator tries to achieve voice differentiation, but he often sounds as if he is standing in a tin can, there are times when he knocks the microphone or the desk, and even times when he stumbles over words. These were not issues in the earlier two books that I listened to.

So my rating of 4.3 is for the book not the technical side.

About the author
John Creasey (1908-1973) published over 600 books under 20+ different pseudonyms. In 1969 he was given the Mystery Writers of America’s highest Honour, the Grand Master award.

Kerrie - Sorry to hear that the technical/audio side of this didn't work well. And I agree completely that we get a good look at the early development of the police procedural in the Gideon novels.

I love the Gideon books. I always appreciate your reviews of audio books because they remind me of enjoyable reading from a long time ago. I may read some of them again. Thanks.

Thanks for this review, I haven't read any of the Gideon books, but I'll be putting them on my list.