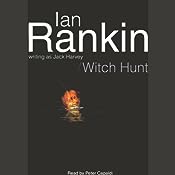 Witch is a terrorist, one of the best, but this job is going to test even her to the very limit. This time her cold calculation may desert her just when she needs it most. On her tail are three very different detectives: one woman, two men. Two are at the beginning of their careers, while one is staking a lifetime's experience on tracking Witch down.

Interpol have tried and failed to find her. Now the combined forces of Scotland Yard and MI5 must try the impossible to prevent a major international incident. Dominic Elder carries her autograph wherever he goes. Witch is his passion, his obsession. And being retired is no bar to his willingness to restart the hunt. MI5 know that the man who wrote the Witch file is the key to catching their quarry. But the truth isn't easy to spot. And it is only when an MI5 novice and his French counterpart piece together the smallest of clues, that Witch suddenly looks vulnerable . . .

This venture by Ian Rankin (writing as Jack Harvey) was the first of 3 novels under that pseudonym. Rankin moves into the world of MI5, spies, and assassinations and WITCH HUNT feels as if it owes a lot to the style of John Le Carre. Certainly the gravelly voice of narrator Peter Capaldi contributes to that feeling. This is very different to his Rebus novels.

The novel begins with a set of seemingly disconnected events: the scuppering of a fishing trawler in the English channel, the murder of a banker in a love nest in Scotland; but to Dominic Elder who took early retirement because of a terrorist incident, they point to one thing: Witch is back!

The plotting in WITCH HUNT is intricate and the novel is part thriller and part police procedural.
It makes very enjoyable listening.

I read the Jack Harvey novels in print form some years ago, but did not think they were as good as Rebus. Not bad, though.