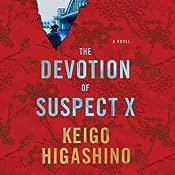 Publisher's blurb:
Yasuko Hanaoka is a divorced, single mother who thought she had finally escaped her abusive ex-husband Togashi. When he shows up one day to extort money from her, threatening both her and her teenaged daughter Misato, the situation quickly escalates into violence and Togashi ends up dead on her apartment floor. Overhearing the commotion, Yasuko’s next door neighbor, middle-aged high school mathematics teacher Ishigami, offers his help, disposing not only of the body but plotting the cover-up step-by-step. When the body turns up and is identified, Detective Kusanagi draws the case and Yasuko comes under suspicion. Kusanagi is unable to find any obvious holes in Yasuko’s manufactured alibi and yet is still sure that there’s something wrong. Kusanagi brings in Dr. Manabu Yukawa, a physicist and college friend who frequently consults with the police. Yukawa, known to the police by the nickname Professor Galileo, went to college with Ishigami. After meeting up with him again, Yukawa is convinced that Ishigami had something to do with the murder. What ensues is a high level battle of wits, as Ishigami tries to protect Yasuko by outmaneuvering and outthinking Yukawa, who faces his most clever and determined opponent yet.

My take:
I must admit I approached this with some trepidation after reading Bernadette's review some weeks back, and, thank goodness, perhaps predictably, I enjoyed it more than she did.

In one sense THE DEVOTION OF SUSPECT X is a police procedural and in another a psychological thriller. There is no doubt about who committed the murder of Togashi, but the reader is unaware of why Ishigami helps Yasuko with confusing the clues that could lead to the identification of the murderer.

Ishigami is a maths teacher at a local high school, but deeply discontented. Once he was recognised as potentially one of the country's best mathematic brains. But things didn't go as expected after he graduated from University and he failed to get the university job that he expected. He took on a school teaching job but dreams of a life dedicated to working on mathematics.

Ishigami's decision to help Yasuko will exact a terrible price and you won't see the final resolution coming.

One of the reasons for reading translated crime fiction is to attempt to understand other cultures. I suspect Japanese readers may be more tolerant of the huge amount of detail in the novel than Westerners, who would like to see the pith of the story closer to the surface. Detective Kusanagi is a very persisent fellow, checking details systematically, looking for holes in alibis. His friend Yukawa, nicknamed Galileo, provides the intuition, and indeed, without his insights, I doubt Kusanagi would ever have seen that Ishigami was connected to the case. But I thought I learnt a bit about the Japanese way of thinking.

While I was listening to David Pittu's excellent narration of Alexander O. Smith's English translation I kept thinking of THE OXFORD MURDERS by Guillermo Martinez, which was based on clues in the form of  Fibonacci numbers. It too was a translated book, translated into English from Argentinian, and the winner of the Planeta Prize.

In some senses THE DEVOTION OF SUSPECT X is not about crime fiction at all, but about the relationship of mathematics to philosophy, and the idea that all human problems can be solved by mathematical logic. Not every body's cup of tea!

There were times that I wished Keigo Higashino would get on with the story, ditch some of the detail, and other times when I really enjoyed it.

About the author:
Keigo Higashino is a relatively young Japanese writer (born 1958) who has been publishing since 1985, has written 13 novels, and has had a number of his stories turned into films or TV series. He won his first prize in 1985 for his debut novel, and in 1999 won the Mystery Writers of Japan Inc award for the novel Himitsu (The Secret). In 2006 he won the 134th Naoki Prize for Yōgisha X no Kenshin. - THE DEVOTION OF SUSPECT X. The title is the third in his Tantei Galileo series, and in 2008 was made into a film.

I'm listing THE DEVOTION OF SUSPECT X in the 2011 Global Reading Challenge, in my list of translated titles I've read this year, and on my list of new-to-me authors.

Nice review. I am still not sure about this one, many have raved about it but it sounds over-long for its content. The plot sounds similar to that of Complicit by Nicci French, which opens with someone finding a body and someone else helping her to dispose of it....it all spirals out of control from there.

Indeed it is a nice review. Glad you enjoyed it more than I did.

Kerrie - A fine review :-). Like Maxine, I'm still not sure I'm going to read this one, but it is interesting to get a look at the way members of another culture think, and how that comes out in the crime fiction they create...

I do find too much detail can blog a story down. I'll have to think about this one.

Great review! I loved The Devotion of Suspect X and have put it on the reading list for our bookgroup in the Fall.

Thank you for the review of an author I have not read. A mystery focused on intellectual rather than physical conflict is intriguing.

In most of the Crime thrillers one is able to predict the end i.e the killer or the way the crime was committed. But the storyline weaved by Keigo just wont let u guess the end.
Not only the sleuths in the book but the readers as well chase the red herring i.e. where the killer us apprehended by the end of the book or not while the climax makes u think ÖMFG, i never thought about this".
This book dwarfs Agatha Cristie' books.
It has no big words or phrases to make u run for a dictionary.