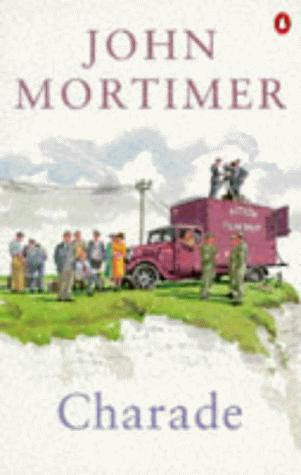 This contribution to Pattinase's Friday's Forgotten Books is from my records for 1988.
CHARADE was actually published over 40 years before that in 1947 when Mortimer was only 23.

Publisher's blurb (Fantastic Fiction)
Its June 1944 in an English seaside resort and a shy young man has just joined an army film unit making a documentary about army training. While shooting a cliff-scaling exercise a sergeant plunges to his death. It seems like an accident, but the shy young man is not convinced.

We are all familiar with John Mortimer as the creator Rumpole of the Bailey, a lovely series with 19 books, and there is even one being published  posthumously this year. Mortimer died in 2009.

Most of us however are probably not aware of his other books, particularly his stand-alones. CHARADE was the first of these.
It was not published in the USA however until 1987.
I found a study guide for it here.
It was reviewed in the New York Times, which says the re-printing was worthwhile.
There is a free audio version available here.

We should thank you for giving such a wonderful blog. Your site happens to be not only informative but also very imaginative too. We find a limited number of experts who can think to write technical articles that creatively. All of us are on the lookout for information on something like this. I Myself have gone through several blogs to build up on knowledge about this.We look forward to the next posts !!

I've read all of the Rumpole books and a have a few of Mortimer's non-Rumpole books. But not this one. After reading your fine review, I'll have to track it down.

I am really enjoying your blog, it has provided me an immense information I was searching for months. I am working on my literature review and it seems that with your blog's help,I will come up wiht a perfect review.Regards.