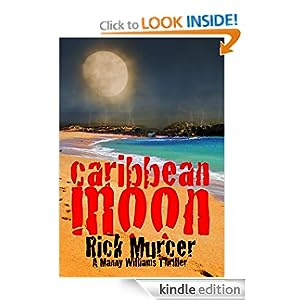 This is written in the tradition of Connelly, Patterson of old, and JA Konrath.

Small-town detective/workaholic, Manny Williams is thrilled with the prospect of finally taking the long-awaited vacation he had promised his wife, Louise.

A bizarre, seemingly random murder in their posh San Juan Hotel, and the heinous cruise ship deaths of two of Lansing’s law enforcement family, brings Manny, and his unique skills, out of cruise mode and head-long into the FBI-led investigation. Manny soon discovers that in this killer’s twisted perception nothing is off limits, prompting a race against time that could cost him everything.

If you like edge-of-your-seat thrillers laced with humor, you'll love this!

I read CARIBBEAN MOON to add to my list for the 2011 Global Reading Challenge, but it didn't quite give me the "set in another culture" South American experience I had been hoping for.

Actually what kept me reading is that most of the action takes place on board a cruise liner, or in the excursion activities associated with it, that very closely resembled a luxury cruise experience I had a couple of years ago. Not the murders, let me hasten to explain, our cruise was very tame by comparison, and that personal experience left me feeling that the author had got the setting absolutely right.

Perhaps the plot itself strains the bounds of credibility - a wedding party of small town cops from Lansing Michigan targeted by a psychopathic killer because of the role they played in a murder conviction - but the setting gives the author plenty of latitude. The nature of the plot means that it is really a police procedural/thriller involving a combined FBI/US police team conducting an investigation on board a cruise liner instead of on land. "Foreign/global" culture really doesn't come into it.

The workaholic hero, Sergeant Detective Manny Williams, a "natural" profiler, supposedly on holidays on the cruise with his colleagues, his boss and the DA and her husband, is a credible character. There are also some very gruesome murders that equally strain the bounds of credibility.

So while CARIBBEAN MOON isn't the best written book in the world (and does have the occasional "proof reading" error), it is a good debut effort, and a reasonable page turner. Many of the reviews on Amazon comment how they didn't see the ending coming. I must admit that about 15% before the end, in Amazon e-book terms, I realised what the next plot twist would be, simply because the action appeared to be over, and I was wondering what the author might do to extend the book.

About the author
See Amazon's author page.
An older writer who started writing only 8 years ago, and then lost his "real job" two years ago.
I want to be a living example that with hard work and God's blessing, you can do anything.
A second novel was published in May 2011: Deceitful Moon (The Second Manny Williams Thriller) and a third is in planning.

Kerrie - Thanks for a well-done, thoughtful review. I get really drawn in to a book's setting when it's done very well, too, so I'm glad the setting in this one was spot-on.

Hm. I think I´ll pass this one.