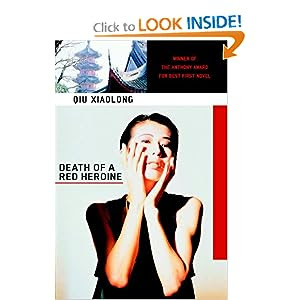 Series: Soho Crime | Publication Date: July 1, 2003
In this Anthony Award-winning debut, Inspector Chen of the Shanghai Police must find the murderer of a National Model worker, and then risk his own life and career to see that justice is done.
My take:

Two old friends who haven't met for twenty years go fishing in a canal and discover the body of a young woman, wrapped up in plastic.

The case is taken on by Chief Inspector Chen Cao of the Shanghai Police and his lieutenant Detective Yu Guangming.
This is the first in Qiu Xialong's Inspector Chen series and so the author spends a little time introducing these characters to the reader, exploring the relationships between them.


Chen was aware of Yu's acerbic undertone. His accelerated  promotion was going to take some living down, not to mention  his new apartment. A certain measure of antagonism was hardly  surprising, especially from Detective Yu, who had entered the  force earlier and had technical training and a police family background.

Chen is an unusual policeman, a graduate in English literature, and a published poet.


Chen had not intended to be a cop - not in his college years.  He had been a published poet as well as a top student at Beijing  Foreign Language Institute. He had his mind set on literary pursuits.   Just one month before graduation, he had applied to an  M.A. program in English and American literature, a decision his  mother had approved, since Chen's father had been a well-known  professor of the Neo-Confucian school. He was informed, however,   that a promising job was waiting for him in the Ministry of  Foreign Affairs.

Chen and Yu are informed that the case has political implications and so they are not only to be advised by an older party cadre, and under the direct supervision of a party secretary, but from the beginning interference comes from their political superiors.

They assemble irrefutable evidence that the person responsible for the murder is an HCC, the son of a well known older party cadre. Even at that stage attempts are made to deflect them. Both are assigned to new jobs. Both seem to be in real danger of losing their jobs.

I found DEATH OF A RED HEROINE fascinating reading. It describes the political changes that Chinese society underwent first of all with the establishment of the Communist Revolution, and then with the Cultural Revolution of the 1960s. At the time the novel is set, in the early 1990s, the winds of change are blowing again, and everything is justified in terms of "for the sake of the Party". Chen and Yu get frustrated because they can't always get on with their first concern, the bringing of a murderer to justice.

DEATH OF A RED HEROINE is a novel you need to read patiently. Its path meanders a little, and the story is littered with references to Chinese literature, which for me didn't always add to the crime fiction aspects. You will see that I am "counting" this novel in the Historical Fiction Challenge. It is recognisably a "police procedural" too.

About the author
Qiu Xiaolong was born in Shanghai. He was selected for membership  in the Chinese Writers' Association and published poetry,  translations and criticism in China.
He has lived in the United  States since 1989 and has an M.A. and a Ph.D. in Comparative  Literature awarded by Washington University.
His work has been  published in Prairie Schooner, New Letters, Present Tense, River Styx,  Riverfront Times, and in several anthologies.
He has been the recipient   of the Missouri Biennial Award, the Prairie Schooner Readers'  Choice Award, a Yaddo and a Ford Foundation Fellowship.
He  teaches Chinese Literature at University College of Washington  University and lives in St. Louis with his wife and daughter.

I've read The Red Mandarin Dress and would like to read this one also. I found the detective very interesting and the political background fascinating!

Kerrie - One of the things I like about Inspector Chen is that he doesn't have a "typical" police outlook, if there is such a thing. His literary background adds an interesting perspective (or maybe it's that I love words and reading, so I can relate to his character).