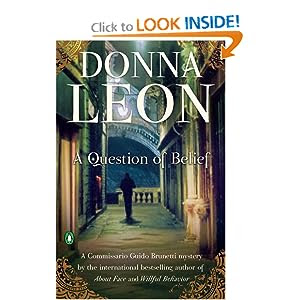 Click on the image or here to read the opening chapter

As Venice experiences a debilitating heatwave, Commissario Brunetti escapes the city to spend time with his family. For Ispettore Vianello, however, the weather is the last thing on his mind. It appears his aunt has become obsessed with horoscopes and has been withdrawing large amounts of money from the family business. Not knowing what to do, he consults Brunetti and asks permission to trail her.

Meanwhile, Brunetti receives a visit from a friend who works at the Commune. It seems that discrepancies have been occurring at the Courthouse involving a judge and an usher with a flawless track record. Intrigued, Brunetti asks Signorina Elettra to find out what she can while he’s away.

When news reaches Brunetti that the usher from the Courthouse has been viciously murdered, he returns to investigate. But why would someone want a good man dead, and what might his death have to do with the Courthouse discrepancies?

It seems that August is a good time not to be in Venice. Not only is it hot and humid, but many officials take holidays elsewhere, leaving the city to an influx of 20 million tourists.

Pulled together by the murder of a homosexual regarded by others as a good man, and whose name has already come to Brunetti's attention in relation to irregularities in the judicial system, A QUESTION OF BELIEF is a perfect illustration of the closely networked community and infrastructure of the city that the tourist doesn't see. Donna Leon uses the novel as a vehicle to deliver a telling description of the corruption and back-handers that underpins the city. Some criminal activity goes unchecked because it involves the duping of the elderly, such as Vianello's aunt, the constant delaying of court cases, or the delivering of financial favours. But some such as murder can't be ignored, even though Vice-Questore Patta, ever mindful of the social favours that can be delivered by the wealthy and socially secure, tries to prevent Brunetti from causing offence.

Brunetti's family gets away to their holiday in the mountains and so we miss our usual glimpses of Guido's interaction with his children and have to make do with his long distance phone calls to his wife.

Once again the murderers are discovered because Brunetti is a man of the city, because he attends the funeral of the murdered man. As Brunetti himself says "the scales fall from his eyes" after the funeral as Donna Leon delivers her own version of the significance of "the dog in the night".

Very recommendable read, but one that you'll get a lot more out of if you read more in this series. (See the list below)

Kerrie - A very fine review - Thanks :-). I liked this one very much, too, and you're quite right about two interesting things that it shows. One is that there are all sorts of linked communities that we don't hear about in the travel brochures. The other is the quid pro quo and corruption that plays such an important part in life in Venice.

And folks, Kerrie's right. You're best off not starting the series with this novel, although you certainly could.

You're right Margot. This is one series that pays well when you read more of them, and in order if you can