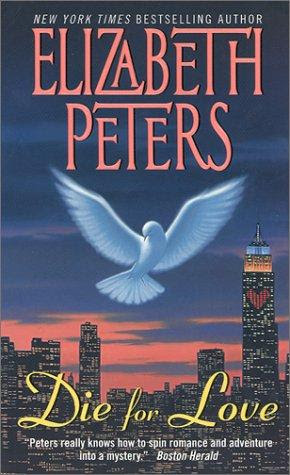 comes once again from my records in 1990.
While no-one in their right mind would say Elizabeth Peters is a forgotten writer, it is her Amelia Peabody series that is much better known.

There were just four titles in Elizabeth Peters' Jacqueline Kirby series. DIE FOR LOVE, published in 1984, was #3.

The author describes Jacqueline Kirby as
"Jacqueline Kirby (known as "Jake" to her friends), a librarian turned romance novelist, enjoys nothing more than people who take themselves way too seriously. Whether it is history buffs exploring ancient Roman ruins or a convention of romance writers, Jacqueline enters into the spirit of the group.  Her fellow enthusiasts are never quite sure whether Jacqueline is a new convert, or an amused observer of their eccentricities."

When Jacqueline Kirby, a Nebraska librarian who desperately desires some excitement, attends the convention of the Historical Romance Writers of the World in New York City, she is shocked by what happens. Firstly, a scandal columnist dies under mysterious circumstances, and secondly, the writer Valerie Valentine, a popular genre star, claims that someone is trying to kill her, and asks for her help.

Once again, in her own words:
Under her pseudonym as Barbara Michaels she has written twenty nine novels of suspense. As Elizabeth Peters, she has produced thirty seven mystery-suspense novels, many of them set in Egypt and the Middle East. Dr. Mertz was awarded a D.H.L. from Hood College in 1989. The Mystery Writers of America awarded her the MWA Grandmaster in 1998. She has also received the Lifetime Achievement Award from Malice Domestic and the Grandmaster Award from Bouchercon.

I love the Amelia Peabody books but i can't come at this series or the other one with a female museum curator as the protagonist and I didn't think much of the one Barbara Michaels book I read either.

Kerrie - I certainly know her better from the Amelia Peabody series. I have to admit I haven't tried the Jacqueline Kirby novels. Thanks for reminding me of them..

I will admit that I didn't take to Ms. Kirby quite like I did Amelia Peabody. That being said, I found this book really funny. It's the author's tongue-in-cheek remarks on book conventions - this one is for romances - and the whole "bodice ripper" phenomenon. Peters meant it in a spirit of fun and I found it charming. All the authors are named Valerie. LOL

I have read some of the Amelia Peabody books, and all of the Vicky Bliss books, but haven't read any of this series or her other standalone books!