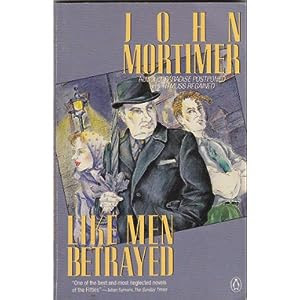 This contribution to Pattinase's Friday's Forgotten Books comes once again from my records in 1990.

Set in London, this book is the sinister tale of a middle-aged solicitor and his hopeless attempts, both spiritual and real, to find his son and that son's search for his father.

It is the tale of Christopher Kennet, a respected solicitor and a private man, who discovers his son's involvement in a mysterious and possibly illegal manipulation of the funds of a longtime client. As the deal unfolds, both father and son discover their real values in life--much to their own surprise. 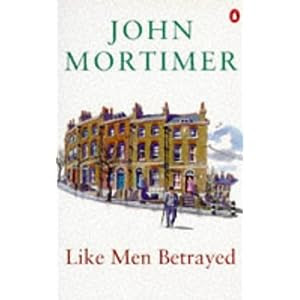 First published in 1953, LIKE MEN BETRAYED was Mortimer's second novel, preceding his much more famous Rumpole series by 25 years.

Mortimer made his radio debut as a dramatist in 1955 with his adaptation of this novel for the BBC Light Programme.

Mortimer was called to the Bar (Inner Temple) in 1948, at the age of 25. His early career consisted of testamentary and divorce work, and it wasn't until he took silk in 1966, that he began to undertake work in criminal law. Rumpole first emerged in 1978.

Kerrie - Thanks for giving this background on John Mortimer. I always like learning a little about the authors behind the books. Interesting stuff here.

I've read a lot of John Mortimer, mostly all the Rumpoles. I haven't read this one, but it sounds like something I'd enjoy.

An excellent book, a precious find in a hotel lobby... Still have it to this day 12 years on, read it 4 times or so. Not the happiest of books to read but utterly enjoyable