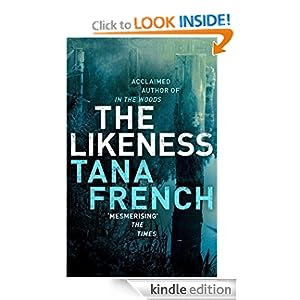 This is not a review. That will come in a few days.
This is just an attempt to explain the lack of recent blog posts.

I guess we all go through times when we are just not reading as fast as we would like, and I'm wallowing through one of them now.

It is not that I don't like THE LIKENESS by Tana French. I do. But I just don't seem to manage to read much at a time. The writing seems very dense (or maybe it is my brain that is dense).

Add to that, that it is a very long book -708 pages in the made-from-paper-version and over 9,000 "locations" in the Kindle version - that makes it 3x the length of an Agatha Christie novel, and I'm only about a third of the way after a week.

Six months after the events of In the Woods, Detective Cassie Maddox is still trying to recover. She's transferred out of the murder squad and started a relationship with Detective Sam O'Neill, but she's too badly shaken to make a commitment to him or to her career. Then Sam calls her to the scene of his new case: a young woman found stabbed to death in a small town outside Dublin. The dead girl's ID says her name is Lexie Madison - the identity Cassie used years ago as an undercover detective - and she looks exactly like Cassie.

With no leads, no suspects, and no clue to Lexie's real identity, Cassie's old undercover boss, Frank Mackey, spots the opportunity of a lifetime. They can say that the stab wound wasn't fatal and send Cassie undercover in her place to find out information that the police never would and to tempt the killer out of hiding. At first Cassie thinks the idea is crazy, but she is seduced by the prospect of working on a murder investigation again and by the idea of assuming the victim's identity as a graduate student with a cozy group of friends.

As she is drawn into Lexie's world, Cassie realizes that the girl's secrets run deeper than anyone imagined. Her friends are becoming suspicious, Sam has discovered a generations-old feud involving the old house the students live in, and Frank is starting to suspect that Cassie's growing emotional involvement could put the whole investigation at risk. Another gripping psychological thriller featuring the headstrong protagonist we've come to love, from an author who has proven that she can deliver.

I read IN THE WOODS at the end of 2007. Here is my mini-review (I rated it at 4.5)
Three 12 years olds are playing in the woods at Knocknaree and then there is one. The other two vanish and the remaining child Adam Ryan is in a catatonic state and remembers nothing. Life goes on but the two children are never found and Adam Ryan becomes detective Rob Ryan. Twenty years on the woods are to be demolished to make way for a motorway. When protesters assert that the woods are of archaeological significance they are given time to excavate and to retrieve anything of value. Then the body of a young girl is found near the excavation site, and Rob Ryan is part of the team assigned the case. He knows he should declare his conflict of interest but he doesn't. Gradually as the investigation develops the layers of his memory onion peel back and he gets closer to the truth.

I deliberately chose not to read another Tana French novel for the very reason I found the first one (IN THE WOODS) way too long - needed a very good editor. I was looking around for another Irish writer to read but went with a different recommendation all together as Tana is just not for me

I liked The Likeness, was actually thinking (rashly) that I'd reread it, but then I thought about my TBR pile and list and decided that isn't possible.

It's worth the time it takes to read it. I thought Tana French did an amazing job here with different plot lines, observations about Irish life, etc.

I didn't remember it as being so long, so I must have enjoyed it.

I know it takes a long time to get through it; still I love her wordy style and am ready for more books by her hand :)

Thanks for the encouragement folks. I've just made 50%. My experience is that often books speed up (or is it me??) after the half way point - let's hope so!