So they'll all come from my 2012 Reviews.
At least that's the plan. 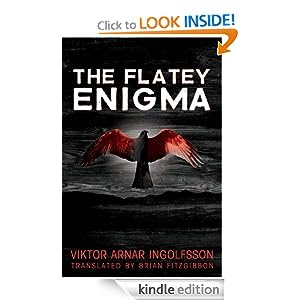 I've chosen THE FLATEY ENIGMA because Ingolfsson is a new-to-me author and because it is such an unusual story.

This is a novel set on two levels - the primary level the investigation into the death of a body found on a remote Icelandic island.

The nearest "big" island is Flatey and it appears the body has been dead for some time. So it is not a case of real urgency for the Reijkavik Police Department and so they've assigned Kjartan, who has just started working for the district magistrate in a clerical capacity.

Kjartan has to determine who the dead man is and how he died. While he does that he will stay with Grimur, the administrative officer for the district of Flatey.  more

Check other people's contributions to the meme here.

Kerrie - I'm impressed with your lateral thinking :-). And thanks for reminding me that I've still to read this one. Shame on me!

Wow, I love the cover! It does sound like an interesting novel.

Iceland is a new locale for me. Sounds very intriguing.