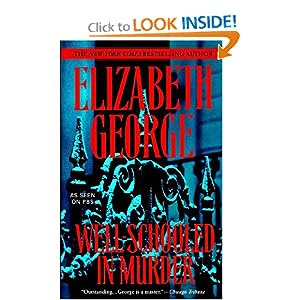 Last week my post in Forgotten Books about Agatha Christie provoked a couple of responses about whether someone as well known as Agatha Christie could ever be forgotten, although perhaps individual titles might well be.

I guess the same could be said of all authors who are still living, still writing, and still selling well.

Elizabeth George is a case in point. Her Inspector Lynley series is still popular and new titles are being published.

WELL SCHOOLED IN MURDER though was published in 1990, the third in the series, and I caught up with it in 1992.

Book Description (from Amazon where it is now available for Kindle)

When thirteen-year-old Matthew Whately goes missing from Bredgar Chambers, a prestigious public school in the heart of West Sussex, aristocratic Inspector Thomas Lynley receives a call for help from the lad's housemaster, who also happens to be an old school chum.

Thus, the inspector, his partner, Detective Sergeant Barbara Havers, and forensic scientist Simon Allcourt-St. James find themselves once again outside their jurisdiction and deeply involved in the search for a child—and then, tragically, for a child killer.

Questioning prefects, teachers, and pupils closest to the dead boy, Lynley and Havers sense that something extraordinarily evil is going on behind Bredgar Chambers's cloistered walls. But as they begin to unlock the secrets of this closed society, the investigation into Matthew's death leads them perilously close to their own emotional wounds—and blinds them to the signs of another murder in the making....

The cover above, for the edition released in 2007, contrasts nicely with the one to the right which I think actually gives the reader more idea of the setting of the novel.

George has recently embarked on a new venture -a young adult fantasy series - which has had a mixed reception.  The first is titled THE EDGE OF NOWHERE.

Check contributions by others this week to Pattinase's Friday's Forgotten Books.

Elizabeth George lives on Whidbey Island in the state of Washington, and of course there has been a lot of discussion over the years about the fact that she is an American author writing a very British feeling series. Her popularity as an author has been greatly enhanced by the Lynley television series, although there are marked differences between the books and the tv characters. The fact that she decided to kill off Lynley's wife in #13 caused controversy and distress among her readers.

I loved the Lynley series for the first few books, up until With No One As Witness. After that, the series took a serious nosedive and has not recovered. The books have become too long and tedious, and the characters are *boring*. Ms George needs a good editor to bring her back to the tight plotting and suspense of the early books. This is, of course, just my humble opinion.

'Well-Schooled in Murder' was the first Elizabeth George book I read and I was hooked. However, I have to agree with the comment above that I feel the books have become a victim of their own success and the last few ones have not engaged me so much (although I did quite like 'What Came Before He Shot Her', which greatly divided readers at the time). But the ones that came after are long, wordy and I can't even remember the plot.

Elizabeth George is one of my favorite authors. I have read all of the series and my only complaint is that they get longer and longer, and I think some of the plot could be pared. I think I did enjoy the earlier ones more, and have gone back and reread some of those because she writes so well.