Review: DEKOK AND THE GEESE OF DEATH, A. C. Baantjer 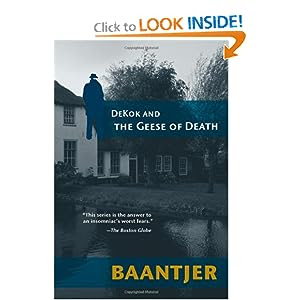 In The Geese of Death, DeKok takes on Igor Stablinsky, a man accused of bludgeoning a wealthy old man and his wife.

To DeKok’s unfailing eye the killing urge is visibly present in the suspect during questioning, but did he commit this particular crime?

All signs point to one of the few remaining estates in Holland. The answer lies within a strange family, suspicions of incest, deadly geese and a horrifying mansion. Baantjer’s perceptive style brings to light the essences of his characters, touching his audience with subtle wit and irony.

Another enjoyable title from this series, which is now definitely on my list of reliable quick reads.

DeKok and his colleague Vledder are working all the hours they can to find out who has been brutally murdering elderly people. The accused man, Igor Stablinsky, has what appears to be an agenda, a list of names and addresses in his pocket, and the names of the two dead people are on it. In a careless moment in his office, with the crowbar used for the last murder on his desk, DeKok turns his back on Stablinsky, who seizes the opportunity to attack the Inspector.

At the same time a Mrs Bildjik rings the police station about her geese. Her name is also on Stablinsky's list. The Bildjik family proves to be a strange one, with all its members having names beginning with the letter I. The matriarch Isolde Bildjik is wealthy, and invalid, confined to a wheelchair, and convinced that someone is determined to kill her. DeKok's curiosity is roused particularly after her geese, bought to raise the alarm of intruders, are all poisoned. The plot is a bit convoluted with three more murders and then one foiled.

There are some quirky bits to these stories: the way DeKok's eyebrows ripple like black caterpillars, the dilapidated old VW he and Vledder travel in, Lowee the barkeeper whom they visit from time to time for underworld information, the way DeKok's feet hurt and his legs itch when he is making no progress in a case, and then the way the final explanations take place at a supper party hosted at home by Mrs DeKok. Just enough to bring a smile to the reader's face. At the same time clues stimulate the grey cells.

Kerrie - I'll admit this is a series I've heard about but haven't yet tried. Thanks for putting it back on my radar as it sounds like a good series.

The title made me smile a bit - maybe just because it has the words "Geese of Death" in it. But reading over your review it actually seems like a pretty compelling read, and dark in places. Might try it, thanks!