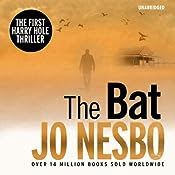 The thrilling first book in the best-selling Harry Hole series, never before published in English.

Harry is out of his depth.
Detective Harry Hole is meant to keep out of trouble. A young Norwegian girl taking a gap year in Sydney has been murdered, and Harry has been sent to Australia to assist in any way he can.
He's not supposed to get too involved.
When the team unearths a string of unsolved murders and disappearances, nothing will stop Harry from finding out the truth. The hunt for a serial killer is on, but the murderer will talk only to Harry.
He might just be the next victim.

Appearing in English for the first time, The Bat is the legendary first novel from the worldwide phenomenon Jo Nesbo.

Jo Nesbo was almost coy at Adelaide Writer's Week last year when he told us THE BAT would be released in English during 2012. It's setting alone, Harry Hole in Sydney investigating the murder of a Norwegian tourist, ensures that it is of interest to Australian crime fiction addicts, especially those who have followed Harry's progress in the later novels in the series.

I wondered at the time whether his coyness was related to the Australian setting, whether he thought that Australian readers would be supercritical about comments made about our home by an "outsider". Or was he embarrassed because he thought we would find the story unpolished?

Nesbo himself says
“Written in beginner’s euphoria. A story which bears the marks of where it was written, both in terms of geography and my life. Just recently I read it on the radio, and to some extent I was dreading all the mistakes new writers make, but what struck me was how fresh and bold it is.”

Most reviews point out how much THE BAT fills in Harry Hole's back story.
Maxine Clarke said "THE BAT is a serviceable, tense crime novel with intriguing hints of what is to come".
But reviewers are divided about whether they like this book as much as later titles, whether delaying its availability in English was a good idea or not.

For me, the Harry Hole we meet in THE BAT isn't really the same person as we meet in later titles, although the signs are there.
In addition there's a lot more evidence of research into the setting than we get in later titles, possibly because Nesbo felt he had to explain the setting more to his Norwegian readers. At times it reads as if he has picked up a book of Aboriginal legends, studied the map of Sydney very carefully, and read a few travelogues.
I had trouble accepting that the Sydney Police would give Harry Hole such powers in directing action in a crime investigation.

Nevertheless an enjoyable and worthwhile read for me.

Other Reviews to consider

Reviews on MiP of other books in the Harry Hole series
NEMESIS
THE REDEEMER
5.0, THE SNOWMAN
4.8, THE LEOPARD
4.7, HEADHUNTERS - not a Harry Hole
4.7, PHANTOM