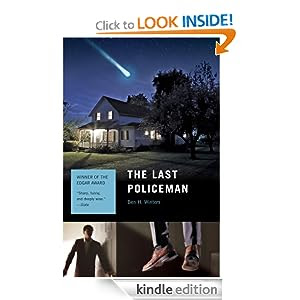 Winner of the 2013 Edgar® Award Winner for Best Paperback Original!

What’s the point in solving murders if we’re all going to die soon, anyway?

The Last Policeman presents a fascinating portrait of a pre-apocalyptic United States. The economy spirals downward while crops rot in the fields. Churches and synagogues are packed. People all over the world are walking off the job—but not Hank Palace. He’s investigating a death by hanging in a city that sees a dozen suicides every week—except this one feels suspicious, and Palace is the only cop who cares.

The first in a trilogy, The Last Policeman offers a mystery set on the brink of an apocalypse. As Palace’s investigation plays out under the shadow of 2011GV1, we’re confronted by hard questions way beyond “whodunit.” What basis does civilization rest upon? What is life worth? What would any of us do, what would we really do, if our days were numbered?

Ebook contains an excerpt from the anticipated second book in the trilogy, Countdown City.

How will people behave when the end is near?

THE LAST POLICEMAN depicts a world assessing what is important. Everyday in the city of Concord, Massachusetts, people are committing suicide, or going off to do whatever they've always wanted to do, or just not going to work.

Public infrastructure is collapsing. Fuel supplies are almost nil. There is no public transport, telephony is collapsing, there are very few cars on the road. Outside public buildings people hand out pamphlets urging citizens to pray. And all the time the asteroid gets closer. The exact location of where it will hit, and exactly what day are still unknown.

In the midst of it all Concord Police Department still functions although many crimes like drug possession are being overlooked. Henry Palace is CPD's newest employee and for him crime detection, particularly the investigation of homicide, is still important. And his bosses and colleagues humour him, although at times his persistence is infectious.

So when Peter Zell is discovered dead in the toilets at the local MacDonald's Henry Palace sees signs that he believes indicate murder not suicide.

THE LAST POLICEMAN reminded me of the detective stories set on the battlefields of World War One. How important is it to solve a murder case when death is all around?

I liked this book but wanted to feel a sense of panic or urgency in the people that I didn't. I have heard the second book is better than this one.

Glad you really enjoyed this one.

Interesting post and the novel sounds intriguing. Thanks for pointing it out. I'm linking the post in my newsletter; please let me know if you'd like a copy! Thanks so much,
Kris
kris@kristenelisephd.com

This is one I really want to read. Haven't had much luck with the libraries around here, though, so will have to buy it.

Loved this book and can't wait to read the second one.