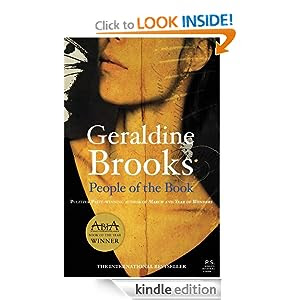 When Hanna Heath gets a call in the middle of the night in her Sydney home about a precious medieval manuscript that has been recovered from the smouldering ruins of war-torn Sarajevo, she knows she is on the brink of the experience of a lifetime.
A renowned book conservator, she must now make her way to Bosnia to start work on restoring the Sarajevo Haggadah -- a Jewish prayer book -- to discover its secrets and piece together the story of its miraculous survival. But the trip will also set in motion a series of events that threaten to rock Hanna′s orderly life, including her encounter with Ozren Karamen, the young librarian who risked his life to save the book.

As meticulously researched as all of Brooks′ previous work, People of the Book is a gripping and moving novel about war, art, love and survival.

I read PEOPLE OF THE BOOK following a recommendation/reminder from a member of one of the face to face book discussion groups I attend.

I need to tell you first that it is not crime fiction although some horrendous crimes are committed, particularly those related to the expulsion and elimination of Jewish populations throughout history. So the book also fits in with my personal challenge to occasionally read outside the crime fiction genre.

Although Geraldine Brooks no longer lives in Australia, where she was born, she manages to flavour the novel with Australian idioms and captures familiar characteristics with her central character Hanna Heath.

Hanna works back in time to piece together the history of the Sarajevo Haggadah from physical evidence left within the book itself. The reader learns the full, fictitious, story of the people who either created, preserved or protected the book, while Hanna herself can only surmise the bare bones. The book is Jewish and so much of the story is related to the persecution of the Jews over a period of nearly six centuries and the relationships between Muslim, Christian and Jewish rulers and populations. That makes it a very topical book even to the present day, and a reminder that human lives are involved in military campaigns. It also points out the sacrifices people make to preserve items that are culturally valuable.

Hannah wants to write a paper about the possible history of the Haggadah and in her pursuit of evidence learns a lot about herself, and, eventually her own family background, secrets her mother has kept from her for thirty years.

As you can probably tell, I enjoyed my trip outside my preferred genre. The writing is superb and the story moves at a good pace. I guess at the end you could say it becomes a thriller as Hanna learns of the latest crime that has been committed in the name of the book.

I love Geraldine Brooks, she has such a good writing style. I liked People of the Book (though can't remember much about it), and also very much liked Year of Wonders, her book about the Plague in an English village.

Glad you enjoyed this one, Kerrie. I'd heard that it was excellent and it certainly seems that it is. I ought to 'wander outside the genre' myself more than I do.

This is my least favourite Brooks, but that is not a bad thing, just that I didn't enjoy this as much as the others.

I loved the historical aspects of this book but found Hanna to be a difficult character to like!