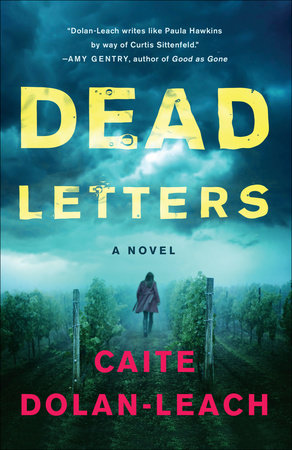 A missing woman leads her twin sister on a twisted scavenger hunt in this clever debut novel with eccentric, dysfunctional characters who will keep you guessing until the end.

Ava has her reasons for running away to Paris. But when she receives the shocking news that her twin sister, Zelda, is dead, she is forced to return home to her family’s failing vineyard in upstate New York. Knowing Zelda’s penchant for tricks and deception, Ava is not surprised when she receives her twin’s cryptic message from beyond the grave. Following her sister’s trail of clues, Ava immerses herself in Zelda’s drama and her outlandish circle of friends and lovers, and soon finds herself confronted with dark family legacies and twisted relationships. Is Zelda trying to punish Ava for leaving? Or is she simply trying to write her own ending? Caite Dolan-Leach’s debut thriller is a literary scavenger hunt for secrets hidden everywhere from wine country to social media, and buried at the dysfunctional heart of one utterly unforgettable family.

This was a book that grew on me. In the first 30 or so pages I began to wonder if I would even go on with it. At first I didn't take to the style nor did I particularly like the characters.

The story is narrated by Ava, the second born of identical twins, who gives us a lot of background, and we flit between past and present. Interspersed with her narration are text messages from her twin Zelda, carefully dated so there is no doubt about their currency, and eventually laying out a puzzle for Ava to solve.

Ava has come home after nearly 5 years in Paris because she has been told that her twin has been killed in a barn fire at their parent's house. Ava is convinced that she would know if Zelda was dead and refuses to believe that the remains found in the barn are Zelda's. She is convinced that Zelda is playing a trick on them. Zelda's phone messages are linked to an alphabetical puzzle and Ava is convinced that when she has solved the puzzle she will know the truth.

By the final pages I too wanted to know the truth.

Despite the fact that the author was born in the aare that is the setting of the novel, it doesn't have a particularly American feel to it.

Caite Dolan-Leach is a writer and literary translator. She was born in the Finger Lakes region and is a graduate of Trinity College Dublin and the American University in Paris. Dead Letters is her first novel.