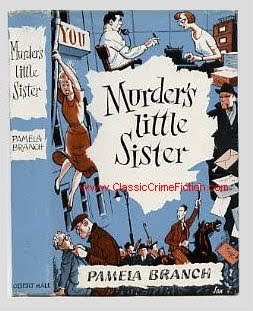 Now this is one of those books where readers of these posts may be able to tell me more than I could find out.

MURDER'S LITTLE SISTER by Pamela Branch is recorded in my little green book as the first book I read in 1978. And about it I know little more than that.

I've found this rather intriguing cover online. The site lists 4 books by Pamela Branch:
There's a review on LibraryThing which comments "Pamela Branch regretfully wrote only four supremely funny crime novels before her untimely death in 1967." Another comment talks about black humour in a crime novel.

There's an alternative cover shown and a synopsis:
Enid Morley has done her best to kill herself, only to realise someone else wants to kill her as well. Not as good as Branch's three other novels, but still a classic!

A listing on Rue Morgue Press says that Pamela Branch had a wicked sense of humour. She delighted in sending "postcards with smears of pretence blood on them, purporting to be from her various characters," or "a dreadful squashed box of chocolates with very obvious pinholes into which poison had clearly been injected."

MURDER'S LITTLE SISTER was apparently the only one of the four titles published in the US. There was rumoured to be a fifth book but she died at 47 of cancer and it never made it to the press. The Rue Morgue Press article about her contains a lot more detail.

It does seem if you have a copy of a Pamela Branch novel on your shelves, you could name your own price for it.

So, did Pamela Branch figure in your reading?

Sorry can't help with this. It looks a really forgotten book! I've never heard of it or of Pamela Branch. I like the cover.

I wish I'd kept a record so far back! I did list books I'd read when I was a teenager but have lost the list!!!

What a pity you didn't record what you thought of it.

Not entirely forgotten though! The BBC did "The Wooden Overcoat" as the Saturday Play on Radio 4 back in 2007.

with David Tennant (Dr Who!), David Benson, and Julia Davis.

I remember enjoying The Wooden Overcoat, a long time ago. Thanks for the link to the excellent Rue Morgue assessment.

I picked up the fours books a few years ago, in the Rue Morgue editions. I'd found 'The Wooden Overcoat' in the library years before.
All the books are good, though TWO is a true masterpiece. There are characters in common between all the books, though only two have feature Asterix Club and Clifford Flush.