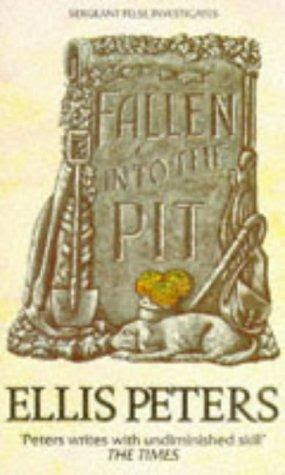 Many readers will be familiar with the work of Ellis Peters, through her creation, Brother Cadfael.
But it may come as a surprise to some that she created an earlier popular detective series whose central character was Sergeant George Felse. There would eventually be 13 novels in the Felse series, spanning 1951 -1978. The last, RAINBOW'S END, was published just after the appearance of the first in the Cadfael series, A MORBID TASTE FOR BONES. In the Cadfael series Peters (aka Edith Pargeter) was able to combine her interest in local history with her skills in telling a murder mystery.

The first in the Felse series was FALLEN INTO THE PIT.
Description from Fantastic Fiction:

"Understand me once and for all, fighting is something not to be considered short of a life-and-death matter... It proves nothing. It solves nothing," Chad Wedderburn tells thirteen-year-old Dominic Felse. A classics master who fought with the Resistance, Wedderburn came home to Comerford to teach school. Ironically, when the peace of the little village is shattered by the murder of a former German prisoner of war, it is the peaceful Wedderburn who becomes the primary suspect. Police Sergeant George Felse is deeply disturbed that his son Dominic is the one who discovers the body, and that the boy has begun doggedly pursuing clues in Comerford's isolated countryside. Murder is a deadly business, and the closer young Felse comes to the truth, the more likely he is to become a victim himself. His father knows this all too well, and for the first time in his career his personal life is threatened by his policeman's duties. Now, as George Felse uncovers the skeletons in the closets of Comerford's best citizens, he begins to understand the forces that may drive men or women to desperate acts. But will he deduce enough to forestall another tragedy - or stop a killer with a twisted mind and bloody plans? Rich with the hues of the Shropshire countryside and its vividly drawn character portraits, this irresistibly suspenseful mystery is still further reason to place Ellis Peters alongside Agatha Christie, Dorothy Sayers, and P. D. James."

By the 5th book in the series Peters had given Dominic Felse, the son of her original policeman, a share of the action. Dominic had originally featured in FALLEN INTO THE PIT as the discoverer of the body and inquisitive sleuth. From the 5th novel onwards, Dominic and George alternate as the protagonists, the former as an amateur detective, the latter as a policeman.

I've been struggling to think of another crime fiction "series" where this occurs - father and son alternating as protags. Perhaps you know an example.

Kerrie - Thanks for introducing us to this side of Ellis Peters. I've been trying to think of any father/son duo where they alternated as protags. The only set that comes to my mind is Ellery and Inspector Richard Queen. And yet, even there, Richard Queen didn't really appear separately from his son. He was hardly a "sidekick," but at the same time, he didn't "star" the way Ellery did. Interesting question...

I wish our library carried these earlier Ellis Peters. We have all those Brother Cadfael books, but I'm not a fan of "historical" detective fiction because it seems to be full of anachronisms. I'd love to read some of her more "contemporary" mysteries. This one sounds interesting.

Thank you for reviewing this one.

I read one of these a few years ago. The only thing I remember is that I enjoyed it so I think perhaps it is time to re-read it.