The discovery of a body in the vicinity of a fox hunt, and near where animal rights protesters have been seen provides an intriguing puzzle. A phone call reporting the death has been made from a mobile, the caller not identifying himself, and the body supposedly in a building half a mile away from where it has been discovered. And why has the body, one Patrick Rawson, a horse dealer, driven out to this isolated spot? Who was he meeting? And is there a connection to the hunt?

The story doesn't actually begin with this incident but with the reading of a page from a journal from 40 years before. The connection between this journal, with pages popping up occasionally, and the main action, begs for explanation for most of the novel.

In those days, there were always just the three of us. Three bodies close together, down there in the cold, with the water seeping through the concrete floor, and a chill striking deep into flesh and bone. The three of us, crouching in the gloom, waiting for a signal that would never come. 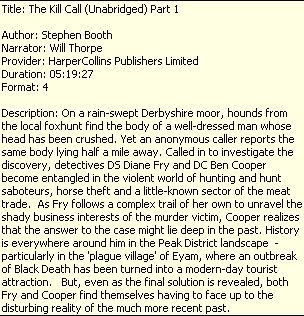 The hunt for a murderer leads Dianne Fry and Ben Cooper, tension always crackling between them as Cooper tries to help Fry who is facing demons he doesn't understand, on a path from the local fox hunt, to the horse meat trade, to Britain's preparations 40 years before for a nuclear cataclysm. It is a complex path, complicated by the relationships between various characters. I've probably come away knowing a lot more about fox hunting, the horse meat industry, and even the workings of the police force than I really needed to know, but I've come away feeling that I've had a thorough immersion. Make no mistake - it all works together well.

There were many voices for the narrator Will Thorpe to produce, but I need to comment here on what I feel was a mistake. It is not a problem you'll notice if you read a paper copy of the book. However the voice that Thorpe chose to give Dianne Fry is dreadful and sounds as if she is speaking with her epiglottis half closed, and a peg on her nose. If you think it's just my hearing check what others have said.

Sample THE KILL CALL before you buy: in text on Stephen Booth's site, the audio on Audible.

I haven't found any other reviews of THE KILL CALL on my usual spots, so if you know of one, leave a link in the comments and I will add it to the post.
I haven't read all the books in the Fry & Cooper series, and have at least one more on my shelves I think.
Here are some min-reviews from my database.

It's almost May Day, and on the desolate moors of Dark Peak the villagers of Withens are dying. One has been battered to death and left for the crows to find; another chose the wrong time to call on a neighbour. And one has been dead for two years – though not everyone will believe it.
As far as the parents of missing student Emma Renshaw are concerned, their daughter is alive – which doesn't help DS Diane Fry in her efforts to re-open the case. Will a grim discovery finally allow the Renshaws to return to their normal lives or break their grip on reality?
DC Ben Cooper's attempts to solve the killings come against an equally impenetrable barrier in the shape of the Oxley family. Descendents of tunnel-builders, they stick to their own area like the hefted sheep on the hillsides, passing on secret knowledge through generations and guarding their secrets from the likes of Cooper.
Winning the trust of the Withens folk and establishing a link between the deaths is not the only challenge facing Fry and Cooper. What evidence they have has been preserved in such a way it can never be presented to a judge and jury

The vast labyrinth of caverns, passages and subterranean rivers beneath England's Peak District are a major tourist attraction. But this summer not all the darkness is underground, and not all the devils are folk legends.
Mingling with the holidaymakers is a convicted killer, bent on revenge. Fourteen years ago Mansell Quinn was sentenced to life imprisonment for the murder of his lover. Now he' s out under licence, whereabouts unknown, and his ex-wife has been murdered.
As they try to anticipate the fugitive' s next move, detectives Diane Fry and Ben Cooper become increasingly puzzled by the case. Why did Quinn' s two friends refuse to back up his alibi? And why did nobody visit him in prison for the last ten years of his sentence? Nobody, that is, except one of those two friends: ex-soldier Will Thorpe, now living rough somewhere in the Hope Valley.
Overstretched and unable to apprehend a killer who moves around the area with impunity, the police can do little but warn other potential victims to be on their guard.
And as the son of Sergeant Joe Cooper, the officer responsible for putting Quinn behind bars, Ben realizes that his own name could be high on the list…

Soon there will be a killing. Close your eyes and breathe the aroma. I can smell it right now, can't you? So powerful, so sweet. So irresistible. It's the scent of death… The anonymous caller who taunts the Derbyshire Police with talk of an imminent killing seems to be just another hoaxer. But Detective Sergeant Diane Fry begins to take him seriously when a woman is snatched from a multi-storey car park. This was no opportunist attack but a carefully planned abduction - and it's possible the chilling voice is telling the truth when it hints at earlier murders and bodies waiting to be found in 'the Dead Place'. Detective Constable Ben Cooper, meanwhile, has succeeded in finding a body - or rather, a collection of bones. This comes as a shock to the deceased's family, for Audrey Steele should have left no bones. Eighteen months ago, after dying from natural causes, Audrey was cremated and her ashes scattered in Edendale's memorial gardens. Their investigations lead DS Fry and DC Cooper into the world of those whose lives revolve around death. And finally, in a boarded-up ancestral home that has long been the stuff of legend in the White Park, a crypt full of skulls yields it dark secrets.

#7 in the Ben Cooper & Diane Fry series. A house fire results in the death of a mother and two of her children, and a reclusive woman is shot dead when standing at her bedroom window. DS Fry is called to the house fire, DC Ben Cooper to the shooting. But inevitably the cases they are working on become connected. An excellently stimulating read.
I think there are a couple of things that make this series different
* I am struck by the fact that the language is ""ordinary"" i.e. everyday words particularly in the dialogues
* the nasty cop/nice cop routine comes out strongly too in the partnership of DS Diane Fry and DC Ben Cooper. She is without doubt the nasty one, putting people offside all the time, but also asking the hard questions and pointing out the things that others gloss over. He is the intuitive one. You see that also in Dalziel and Pascoe but I actually think Stephen Booth does it better
* Cooper and Fry often act in ignorance of each other's discoveries but the reader is omniscient, with the opportunity to solve the conundrums before either of the detectives
* and finally there are some open ended questions. Times when the answers are not so readily forthcoming.

Kerrie -
As always, thank you for your thoughtful review. I haven't read this one, but it sounds like a good find! I found two other reviews of the book here and here, but they are not as thorough and detailed as yours. Still, I thought I'd share them with you for what they're worth.

Thanks Margot - I've added them

I really like the Fry and Cooper series, but I am far behind, because I waited for the first ones to be translated and appear in our library. I think I have read four or so, and as the relationship between the characters is rather important, I prefer to read the series in order.