This unabridged book was beautifully narrated, but the reader had plenty of good material to work with. She really brought to life the characters of Molly, her staid mother and father, her former boyfriend Trevor, the reporter who is trying to scoop the story of the spy who betrayed his country, and Aspinall and Monk, the British agents who are trying to track her husband down. 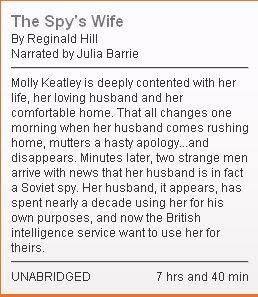 The story has plenty of twists and turns. I thought it was perhaps a bit dated, coming from a period when British writers were reflecting a national  preoccupation with Cold War politics, spies, and double agents.  Hill has focussed on this in some of his other books: Traitor's Blood (1983); DEATH OF A DORMOUSE (1987, writing as Patrick Ruell, my review); and THERE ARE NO GHOSTS IN THE SOVIET UNION (a set of short stories published in 1987, my review).

By mid way through the novel I had some inkling of how Molly's dilemma might resolve itself, but did not stop me from enjoying what was basically a good reading of a well plotted book.

Listen to a sample on Audible.com

I've always got room for Reginald Hill as you'll see if you look at my reviews.

Kerrie - I agree; Hill is a terrific author : ). Thanks for this review.

I read this one two-three years ago, and I have to admit I found very boring and dated.

I am not a big fan of his other books either, but in my opinion they are far better than this VERY QUIET story :D

Maybe it was the being read to that made the difference Dorte. As i said I think it reflects the times in which it was published -(perhaps even it was dated in 1980) - we are much less interested in spy thrillers these days