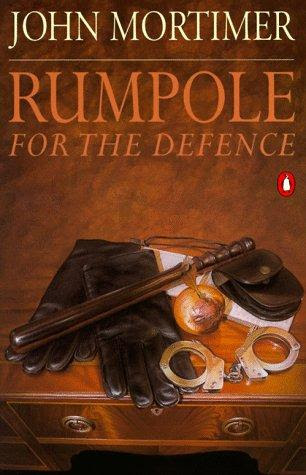 Last year it was the death of John Mortimer that triggered my post, but today it is the fact that my husband bought a copy of RUMPOLE AND THE PENGE BUNGALOW MURDERS in a Penguin Classic edition for the very respectable price of $9.99.

RUMPOLE FOR THE DEFENCE (1982) is a collection of seven short stories about the Old Bailey hack Rumpole, and the various judges and oddballs he encounters.

Part of what endeared the Rumpole books to me was the portrayal of Rumpole in the TV series by Australian actor Leo McKern, who seemed to fit the role so well. - and weren't the opening credits and cartoons wonderful?

Seriously, if you've never read any Rumpole then it is not too late to start - in fact now there is no danger of the series growing, you have a fixed target to aim at ( a very manageable 27) if you decide to set yourself a target of reading them all!

Kerrie - Thanks for reminding me of Rumpole : ). They were a fine series, and I haven't read any of them in such a long time... Time to refresh my memory...

I've never read any Rumpole books! I loved the TV series. Time to look for them in the library.I didn't know that Leo McKern was Australian.

I recently finished reading the last of the Rumpoles. It was a Sad Day. What a marvelous series!

I love Rumpole, and have gotten a little behind on my reading. The television shows were (are!) excellent, no one could be Rumpole else McKern, and it's his face and voice I imagine when reading the books. Yet another author/series I have to read Right Now.

These are great stories, and I've fallen behind in the series. Time to catch up.