I listened to this as an audio book downloaded from Audible.com.
Read by Gordon Griffin, whom I have already met reading RED BONES by Ann Cleeves.

The investigation of a suspicious death in Horsea Marina leads DI Andy Horton to wonder why the victim had come to Portsmouth. When a priest whom the victim visited suddenly dies, and then his lawyer disappears, Andy Horton's gut instincts tell him that these incidents are all connected even if there is no obvious proof.

There's a satisfying complexity added to the plot when Andy becomes aware of a connection between the dead priest and his own mother who disappeared when he was 10 years old.  Other strands to the plot such as Andy's own problems with access to his daughter, the poor health of his sergeant's father, Andy's relationship with his Super, and then an attempt on Andy's life, all mean that there is never a dull moment for the reader. The characters are strongly drawn, and the plot moves quickly.

I enjoyed this title more than I did DEADLY WATERS which I read last year and felt I was missing too much of the back story. 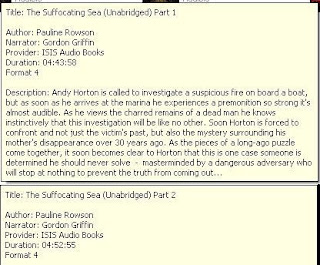 Selected as the "Best of British Crime Fiction" by The Book Depository.