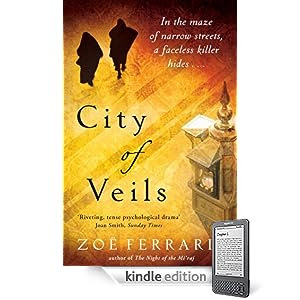 Source: I bought this and read it on my Kindle.
Read the opening chapter at Amazon.

A fisherman reports finding a dead body on the beach near Jeddah: female, young, but with whole sections of her face missing.
Nayir the desert guide is preparing to take another too wealthy family on a desert excursion, but the family keeps shortening the length of the planned trip, until eventually business gets in the way and they don't go at all.
It is 8 months since he has spoken to Katya, despite all the promise of the final days of their first investigation (FINDING NOUF/THE NIGHT OF THE MI'RAJ) At first Katya had phoned Nayir every week or so, but eventually stopped as it became obvious that he was unable to respond.

Katya has begun a new job. Thanks to a government initiative to get more Saudi women into the workplace, a number of positions had opened at the crime lab in police headquarters and Katya had won one of those jobs. The dead body on the beach is assigned to her boss Osama.

Miriam is an American woman rejoining her husband Eric in Jeddah. Eric has a military background and is working as a security guard. He speaks Arabic and has great respect for Muslim culture and wants to be part of it.
Miriam has been on holiday in the US for four weeks, and expects Eric to collect her at the airport. When he fails to turn up she is bundled into a room for unclaimed women. When Eric eventually arrives he seems distracted and has no good explanation for his lateness. Miriam and Eric live in an Islamic neighbourhood, something which upsets Miriam as she feels threatened and out of place. In the month she has been away Eric has done no cleaning and he has bought no food, so he leaves Miriam in their flat while he goes out to buy local food. Miriam thinks she hears him return and when she goes to the kitchen the food is there but Eric isn't. Her worst fears are realised when it becomes apparent  that Eric has disappeared.

CITY OF VEILS skilfully draws these story strands together, blending a murder investigation with a commentary on Saudi culture and in particular the status of women. We feel this commentary in the precariousness of Miriam trying to find out what has happened to Eric, in Katya and Osama trying to discover the identity of the body on the beach and what led to her murder, in Osama's relationship with his wife Nuah, and also in Nayir and Katya exploring their feelings for each other.

In much the same way as in THE NIGHT OF THE MI'RAJ you suspect that Zoe Ferraris didn't actually set out to write a murder mystery, but it certainly becomes the vehicle for the exploration of relationships in an Islamic society. For me it was a pointer to how little I really understand about Islam. In some ways Zoe Ferraris seems to be pointing to the social shortcomings of Saudi society, but on the other hand you are aware that she is treating the culture with great respect. The story raises so many issues for you to think about.

CITY OF VEILS is really another of these novels that crosses out of the crime fiction genre and really deserves a literary "tag" too.

Other reviews to check:
I wrote earlier in my blog about how I started CITY OF VEILS and then realised I needed to read the first book in the series FINDING NOUF/THE NIGHT OF THE MI'RAJ
I urge you to read my earlier post and to consider reading them in order.

A tempting review, and I might try these for the 2011 Global Challenge. Here we don't have an office for "unclaimed women", but a collection point in stores for worn out and confused husbands.

Kerrie - Thanks for this review. This one's been on my TBR list since it came out. I truly enjoyed Ferraris' debut, and this one seems just as good.