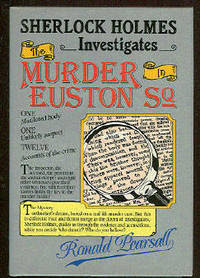 This contribution to Pattinase's Friday's Forgotten Books comes once again from my records in 1990.

Pearsall combines a true murder case--Hannah Dobbs, a servant accused of murdering her mistress in 1879--with murder fiction as Sherlock Holmes unravels a tangle of truths, half-truths and lies.

The hub of the story is the real-life trial of Hannah Dobbs tried in 1879 ( or thereabouts) for the murder of Miss Matilda Hacker. Pearsall claims to have found a scrapbook filled with clippings and dated 1884 and used them to intertwine an investigation using The Great Detective.

Ronald Pearsall (1927 - 2005) was a prodigious author, but his interests don't generally seem to have been in crime fiction. His topics were as varied as pornography and sexuality, antiques, and fishing. I counted 56 titles in the Wikipedia record.

He did however write a biography of Conan Doyle in 1977 and this Sherlock Holmes title in1989. According to the Guardian's obituary in 2005 Pearsall would write about anything if he was asked to. For 50 years he was an established free lance writer.
The Telegraph obituary called him a "literary jack-of-all trades".
He was also one of the team that wrote Dennis Wheatley thrillers after Wheatley died in 1977.