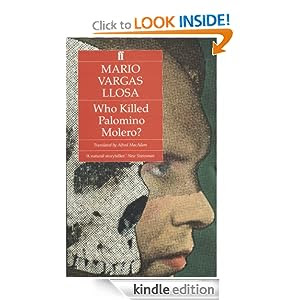 The setting is Peru in the 1950s. Near an air force base in the northern deserts, a young airman is found brutally tortured and murdered.

Two local policemen, Lieutenant Silva and Officer Lituma, set out to investigate. But they are not glamorous detectives with modern resources at their disposal; they don't even have a squad car and have to hitch rides on chicken trucks and cajole a local cabdriver to take them out to the scene of the crime.

Not that anyone seems eager for Silva and Lituma to capture Palomino Molero's killer. But the two policemen persevere, and the slow and haphazard pace of the investigation only serves to intensify the high-pitched narrative tension, as the novel comes to haltingly rest on the very question with which it began.

Who killed Palomino Molero? is an entertaining and brilliantly plotted mystery. It is also serious fiction. Deftly, unobtrusively, the book takes up some of the great themes of all of Vargas Llosa's novels: guilt and innocence, the impossibility of justice in a society grounded in inequality and the eternally elusive nature of the truth.

WHO KILLED PALOMINO MOLERO? is quite different to my usual reading fare. It reminded me of someone like Ernest Hemingway in the way it commented on the social structures and times within which is set.

Usually when the murder of a military person occurs off base there is a struggle about who will do the actual investigation. In this case it seems likely that the victim's fellow airmen are fully aware of who killed Palomino Molero and why.
When Lieutenant Silva tries to question personnel on the air force base after the identity of the victim has been established he strikes brick walls, partly because of this conflict between jurisdictions.


"But until a direct order comes, either from the Air Ministry or the Commander-in-Chief of the Armed Forces, no Guardia Civil is going to violate the code of military justice in a base under my command.

Officer Lituma, a cholo, sees the interview he and Lieutenant Silva had with Colonel Mindreau very different. He sees the treatment they received as racial. Silva, whose skin is a much lighter colour, is not as offended and believes he is making progress.


“He really put us through the ringer, didn’t he, Lieutenant?” Lituma dried his brow with a handkerchief. “I’ve never met a guy with a worse temper. Do you think he hates the Guardia Civil just because he’s a racist, or do you think he has a specific reason? Or does he treat everybody that way? Nobody, I swear, ever made me swallow so much shit as that bald bastard.”

“You’re out of your head, Lituma. As far as I’m concerned, the interview with Mindreau was a total success.”

“Are you serious, Lieutenant? I’m glad to see you can still make jokes. As far as I’m concerned, that little chat was as depressing as it could be.”

“You’ve got a lot to learn about this business, Lituma,” said the lieutenant, laughing. “It was a bitch of an interview, let me tell you. Unbelievably useful.”

“That means I didn’t understand a thing, Lieutenant. It looked to me as though the colonel was treating us like scum, worse than the way he probably treats his servants. Did he even give us what we asked for?”

“Appearances are tricky, Lituma.” Lieutenant Silva once again burst into laughter. “As far as I’m concerned, the colonel yakked like a drunken parrot.” He laughed again, with his mouth wide open. Then he cracked his knuckles. “Before, I thought he knew nothing, that he was fucking around with us because he wanted to protect the precious rights of the military-justice system. Now I’m sure that he knows a lot, maybe everything that happened.”

Lituma looked at him again. He guessed that behind those sunglasses the lieutenant’s eyes, like his face and his voice, were those of a happy man.

“You think he knows who killed Palomino Molero? Do you really think the colonel knows?”

“I don’t know exactly what he knows,"

For Palomino Molero, who was not only a mere airman, but also a cholo but a little lighter skinned than most, and a beautiful singer, had ideas above his station.

An interesting book not only for the well plotted mystery, but also for what it says about Peru in the 1950s. I read it for the South American category of the 2012 Global Reading Challenge

See the review on The Game's Afoot and many thanks to Jose Ignacio for his recommendation.

What good timing this post was for me. I had purchased this book at a book sale in September, and was just cataloging it today and wondering what it was like... and here is your review. Your review encourages me to read it soon.

Thank you very much Kerrie for your kind reference. I'm glad you like it.