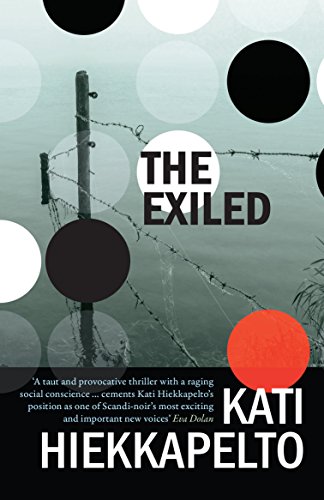 Murder. Corruption. Dark secrets. A titanic wave of refugees. Can Anna solve a terrifying case that’s become personal? Anna Fekete returns to the Balkan village of her birth for a relaxing summer holiday. But when her purse is stolen and the thief is found dead on the banks of the river, Anna is pulled into a murder case. Her investigation leads straight to her own family, to closely guarded secrets concealing a horrendous travesty of justice that threatens them all. As layer after layer of corruption, deceit and guilt are revealed, Anna is caught up in the refugee crisis spreading like wildfire across Europe. How long will it take before everything explodes? Chilling, taut and relevant, The Exiled is an electrifying, unputdownable thriller from one of Finland’s most celebrated crime writers.

Anna Fekete's father was a policeman and after his murder her mother took their family to Finland which is why Anna lives in Finland, and is in part why she also joined the police force.

Her mother has returned to live in the Balkan village of Kanisza which is where Anna was born. Anna decides to go "home" to visit, to catch up with childhood and family friends. Her handbag is snatched at a local market and eventually the thief is found dead. Whele her handbag is found, her passport and credit card are missing.

The local police, including a former colleague of her father, seem very reluctant to investigate the death or to find the little girl who was with the thief. Anna's instincts tell her that there is something wrong and provoke her into undertaking her own investigation despite her mother's opposition. She makes a friend at the local police station and he helps her access files. The more she investigates the more she is convinced there is a cover-up happening. Anna feels the whole scenario has something to do with who she is.

Refugees and gypsies are flooding into Kanisza which is near the border of Hungary and Serbia, in what was once called Yugoslavia, hence the title of the book.

I did not find the book as unputdownable as the blurb suggested. In fact, just as in the first in the series, THE DEFENCELESS, I found the style strangely stilted, and Anna in particular a bit tunnel-visioned and naive. Nevertheless the story held my interestand was illuminating in terms of how people in this area are living.

I have also read
4.7, THE DEFENCELESS

Kati Hiekkapelto is an award-winning Finnish author, punk singer, performance artist, and former special-needs teacher. She is currently setting up an asylum for artists in danger. She is the author of The Hummingbird and The Defenceless, both of which have been translated into seven languages. The Defenceless won the prize for the best Finnish Crime Novel of the Year 2014 and was one of the top 10 bestselling books in Finland across all genres in 2015. David Hackston translated The Dedalus Book of Finnish Fantasy and has been awarded the Finnish State Prize for Translation.

Hmmm, Interesting. I liked The Hummingbird, which was the first in the series, and then The Defenseless, the second. I thought both unique in dealing with a Hungarian-Finnish detective in particular circumstances.

The third book The Exiled may not be as good in Anna Fegete's homeland. I'll read it and find it. But I like her character, complex, blooding, smart, unconventional.