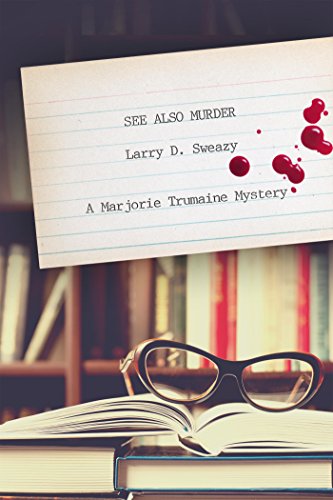 1964—Life on the North Dakota farm hasn’t always been easy for Marjorie Trumaine. She has begun working as a professional indexer to help with the bills—which have only gotten worse since the accident that left her husband, Hank, blind and paralyzed. When her nearest neighbors are murdered in their beds, though, Marjorie suddenly has to deal with new and terrifying problems.

Sheriff Hilo Jenkins brings her a strange amulet, found clutched in the hand of her murdered neighbor, and asks her to quietly find out what it is. Marjorie uses all the skills she has developed as an indexer to research the amulet and look into the murders, but as she closes in on the killer, and people around her continue to die, she realizes that the murderer is also closing in on her.

This novel is a bit like a cozy set in North Dakota, although some truly horrifying murders take place and it really looks like there is a serial killer on the loose.

It probably is important to note the time setting of the book: 1964, and at times I lost sight of that. It does help explain some aspects of the story: the fact that Marjorie's house telephone is a party line, the relative isolation of their farm, the cars they drive, the lack of medical treatment for Hank, and the sort of work Marjorie is doing as an indexer (although I guess there is still work doing that. The author himself is credited with having written indexes for over 800 books).

The thread that binds the plot together and explains the the murders is an interesting one, and I think the author does a good job with local customs and the North Dakota lifestyle.

It kept me reading until the end. One by one the suspects were eliminated, and then at the end there was a good twist which I should have seen coming.