Review: THE GIRL IN GREEN, Derek B. Miller


From the author of Norwegian By Night comes a new novel about two men on a misbegotten quest to save the girl they failed to save decades before.

1991. Near Checkpoint Zulu, one hundred miles from the Kuwaiti border, Thomas Benton meets Arwood Hobbes. Benton is a British journalist who reports from war zones, in part to avoid his lacklustre marriage and a daughter he loves but cannot connect with; Hobbes is a midwestern American private who might be an insufferable ignoramus, or might be a brilliant lunatic with a death wish — it’s hard to tell. Operation Desert Storm is over, peace has been declared, but as they argue about whether it makes sense to cross the nearest border in search of an ice cream, they become embroiled in a horrific attack in which a young local girl in a green dress is shot in the back and dies in Hobbes’s arms. The two men walk away into their respective lives. But something has cracked for them both.

Twenty-two years later, in another place, in another war, the two men meet again. Benton and relief worker Märta Ström are persuaded by a much-changed Hobbes to embark on what may be a fool’s errand in a last-chance effort to redeem themselves when the girl in green is found alive and in need of salvation. Or is she?

Set against the war-torn landscape of a shattered Iraq, The Girl in Green is an adventure story told with all the wit, humanity, and insight of Miller’s acclaimed debut.

I was fortunate enough to be sent a paper copy of this by the publisher some time back, and then a follower of my blog reminded me that I should read it.

Can I say that I wouldn't really classify this as crime fiction, although crimes are certainly committed in their thousands.

One reviewer has described it as a "moral thriller", and given recent efforts to free Mosul from ISIS, it is certainly a topical read. In 1991 Operation Desert Storm was declared a success and peace was thought to have been achieved. But now 25 years later, a whole generation has grown up in a war-torn landscape. 40 years ago I travelled through Iraq before the war began. 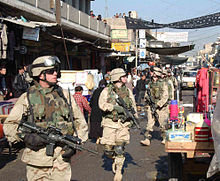 THE GIRL IN GREEN puts the story of the last 25 years into human language, when Arwood Hobbes, an American soldier discharged at the end of Operation Desert Storm, and British journalist Thomas Benton, try to go back into the past. Hobbes in particular wants to wreak his own form of justice.

The events of the book demonstrate in particular how difficult it will be to re-establish peace in the Middle East.

About the author
Derek B. Miller was born and raised in Boston, Massachusetts, and has lived abroad for over fifteen years in Israel, England, Hungary, Switzerland, and Norway. His interest in fiction began a few years after graduating from Sarah Lawrence College. Currently, Derek is the director of The Policy Lab and a senior fellow with the United Nations Institute for Disarmament Research. He has a PhD in international relations from the University of Geneva, and an MA in national security studies from Georgetown University, in cooperation with St Catherine’s College, University of Oxford. He lives in Oslo with his wife and children.

I'm looking forward to this one once it's cpublished in the US!