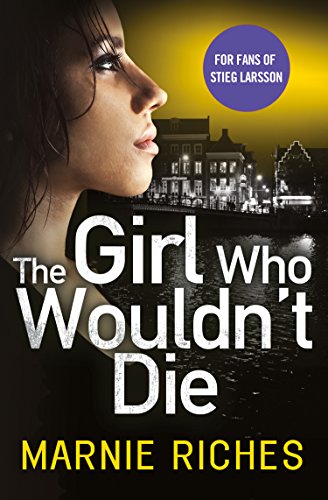 When a bomb explodes at the University of Amsterdam, aspiring criminologist Georgina McKenzie is asked by the police to help flush out the killer.

But the bomb is part of a much bigger, more sinister plot that will have the entire city quaking in fear.

A thrilling race against time with a heroine you’ll be rooting for, this book will keep you up all night!

I'm afraid this book didn't grab me in quite the way the blurb promised. I found the plot overly complex and black. It would probably appeal to a much younger reader.

George McKenzie presents as a Cambridge student studying sociology in Amsterdam where girls are going missing. When a bomb explodes in an old library of the University of Amsterdam, and other students go missing, it is George who works out that there must be some connection with the faculty she belongs to. That's when the reader finds out that George is not quite who she seems.

Not quite my cup of tea.

About the author
Marnie Riches is an award-winning, best-selling British author of crime-fiction, making her debut in the US with "The Girl Who Wouldn't Die" - the first novel in her gritty, gripping George McKenzie series. The series of five books has sold approaching two hundred thousand copies in the UK and continues to garner critical acclaim from her peers and in the press, as well as a loyal readership.

Marnie grew up in a tough neighborhood in Manchester, England, infamous for its violent crime but loved for its world-class music and friendly people. Exchanging the spires of nearby Strangeways prison for those of Cambridge University, she gained a post-grad degree in German & Dutch. She has been a punk, a trainee rock star, a pretend artist and professional fundraiser. When she's not writing, Marnie likes to run, refurbish old houses and drink gin.

Her George McKenzie crime thrillers, tackling the subject of trans-national trafficking, were inspired by her time spent in The Netherlands. "The Girl Who Wouldn't Die" and subsequent four books are must-reads for all fans of Scandinavian and British mystery, suspense and thrillers, who love a kickass heroine who will happily flout the rules if it means catching a killer. George's partnership with troubled Inspector Paul van den Bergen of the Dutch police and her complex family relationships back in London have readers returning, book after book, to see how George's life unfolds...

Marnie is also the author of "Born Bad" and "The Cover-Up" - the critically acclaimed UK hit series about Manchester's notorious gangland.