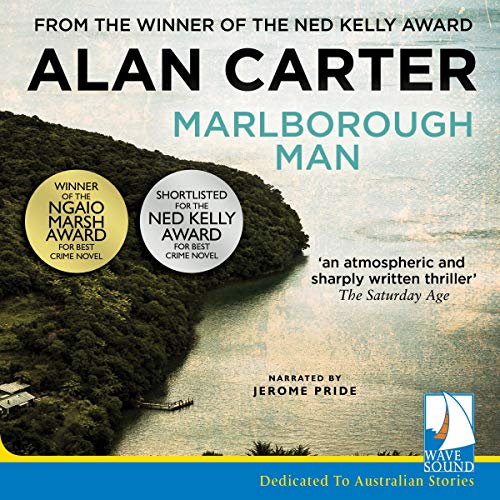 Nick Chester is working as a sergeant for the Havelock police in the Marlborough Sound, at the top of New Zealand’s South Island. If the river isn’t flooded and the land hasn’t slipped, it’s paradise. Unless you are also hiding from a ruthless man with a grudge, in which case remote beauty has its own kind of danger. In the last couple of weeks, two locals have vanished. Their bodies are found, but the Pied Piper is still at large.

Marlborough Man is a gripping story about the hunter and the hunted and about what happens when evil takes hold in a small town.

Ngaio Marsh Award 2018
Alan Carter’s Marlborough Man (Fremantle Press) has won the 2018 Ngaio Marsh Award for Best Crime Novel.
The novel, about an ex-undercover agent from England trying to distance himself from his dangerous past and settle into a quieter life as a local cop in the Marlborough Sound, was chosen from a shortlist of six, with judges calling it a ‘terrific, full-throated crime thriller that puts the freshest of spins on the cop-with-a-past trope’.

This novel has a chequered history for me. I began reading it on my kindle, then found an audio version which I decided to listen to with my fellow traveller on our weekend journeys. At the end of today I had just an hour left to listen to and so decided to read the final chapters on my kindle.

For some reason I didn't at first really take to Jerome Pride's Geordie narration, but as it proceeded the story took over. By the end I really just wanted to know how the story came together.

Nick Chester is a cop from Sunderland (UK) who was part of an undercover operation to bring down one of the local underworld bosses. He has been sent to New Zealand as part of a protection programme, and for the first half of the novel is waiting for the thugs to catchup with him.  When they finally arrive though, and that element of the plot is solved, the local elements of child abductions takes over.

The New Zealand setting and excellent writing gives him the 2018 Ngaio Marsh award.
Also shortlisted for the 2018 Ned Kelly Award.

Good reading.
It reminded me that I really need to read more Alan Carter.