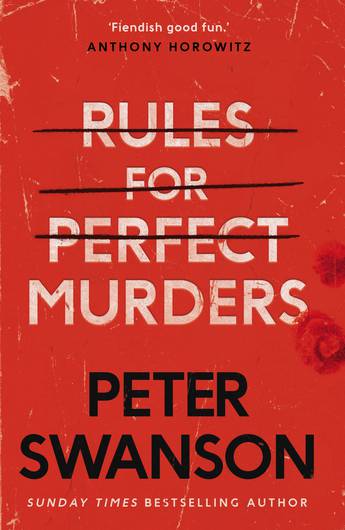 A series of unsolved murders with one thing in common: each of the deaths bears an eerie similarity to the crimes depicted in classic mystery novels.

The deaths lead FBI Agent Gwen Mulvey to mystery bookshop Old Devils. Owner Malcolm Kershaw had once posted online an article titled 'My Eight Favourite Murders,' and there seems to be a deadly link between the deaths and his list - which includes Agatha Christie's The ABC Murders, Patricia Highsmith's Strangers on a Train and Donna Tartt's The Secret History.

Can the killer be stopped before all eight of these perfect murders have been re-enacted?

This novel is presented as a memoir by the narrator, a record of things that have happened, but with names and identifying "characteristics ... changed to protect the innocent."

In the opening scene FBI Agent Gwen Mulvey enters the Old Devils Bookstore in Boston. She has rung to ensure that owner Malcolm Kershaw will be there as she wants to discuss with him. Some murders she is investigating remind her of the plot of Agatha Christie's The ABC Murders. She has found Mal Kershaw through a blog post he wrote some years earlier, a list titles "Eight Perfect Murders".
The books he listed were
The Red House Mystery by A.A. Milne
Malice Aforethought by Anthony Berkeley Cox
The A.B.C. Murders by Agatha Christie
Double Indemnity by James M. Cain
Strangers on a Train By Patricia Highsmith
The Drowner by John D. MacDonald
Deathtrap by Ira Levin
The Secret History by Donna Tarrt

Now it appears that someone may be trying to reproduce the methodology that the list is based on.
Mulvey questions him about why each book was chosen, and they agree between them to re-read the books.
She leaves, saying she will be in touch.

A cleverly written book, in which we are not at all sure about Kershaw's reliability as the narrator.

Peter Swanson's novels include The Girl With a Clock for a Heart, nominated for an LA Times book award, The Kind Worth Killing, a Richard and Judy pick and the iBooks store's thriller of the year in 2015, and, most recently, Before She Knew Him. He lives with his wife and cat in Somerville, Massachusetts.

Titled EIGHT PERFECT MURDERS here. I liked it too although at times it seems like he leaned too heavily on other authors' work. Still, very entertaining.

This one sounds really good, thanks for presenting it. The last mystery I reviewed was by Cara Black, so well done too: https://wordsandpeace.com/2020/06/16/book-review-three-hours-in-paris/