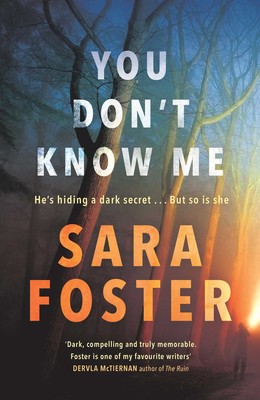 Lizzie Burdett was eighteen when she vanished, and Noah Carruso has never forgotten her. She was his first crush, his unrequited love. She was also his brother’s girlfriend.

Tom Carruso hasn’t been home in over a decade. He left soon after Lizzie disappeared under a darkening cloud of suspicion, and now he’s back for the inquest into Lizzie’s death – intent on telling his side of the story. As the inquest looms, Noah meets Alice Pryce on  holiday. They fall for each other fast and hard, but Noah can’t bear to tell Alice his deepest fears. And Alice is equally stricken – she carries a terrible secret of her own. Is the truth worth telling if it will destroy everything?

A stunning new thriller about the burden of shame from blockbuster author Sara Foster.

Alice Pryce reminds Noah Carruso of his brother's girlfriend Lizzie Burdett who vanished one night twelve years before. Alice is in Thailand teaching English and Noah is having a holiday before attending an inquest back in Australia called to finally resolve what happened to Lizzie.
They fall in love as if their lives depend on it. Both have secrets about what has happened to them in Australia, and Alice is planning never to return.

I kept wondering if this is really crime fiction, but in reality at least one crime needs to be resolved. But on another level it is a romance, but also an attempt to by the main characters to come to terms with shame and guilt.

I've also read
4.3, ALL THAT IS LOST BETWEEN US

About the author
Sara Foster has written five critically acclaimed novels: Come Back to Me, Beneath the Shadows, Shallow Breath, All That is Lost Between Us and The Hidden Hours. She was born and raised in England, and moved to Australia in 2004. She lives in Perth with her husband and two children.