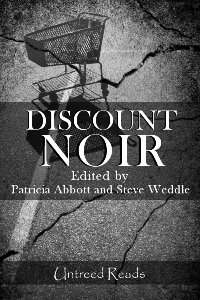 A post by Dorte at DJsKrimiblog today announced
An e-book anthology, Discount Noir, is not only in the shops, but also on the streets! More than forty dark or funny (or dark and funny) flash fiction stories which began as a flash fiction challenge hosted by Patti (she of Friday's Forgotten books notoriety on MiP).


I bought my copy at  Untreed Reads Store and then sent it off to Amazon for free conversion to Kindle.

An announcement earlier this week came from Brian Kavanagh that A CANTERBURY CRIME, the latest in his Belinda Lawrence Murder Mystery series, is available both at BeWrite Books and Amazon.

The ancient walled city of Canterbury has held many secrets over the centuries but none more mysterious than the death of Professor de Gray.

Called in to evaluate the contents of his Tudor Manor House, Belinda and Hazel are confronted with a number of suspects who would benefit from the book the Professor was about to publish; a book he promised would re-write the history of St Thomas Becket who was murdered in the Cathedral in 1170.

The unfriendly secretary Miss Mowbray, the live wire student Tommy, the volatile amateur historian Peter, the respected publisher Sir Justin, and Quentin the upstart publisher prepared to obtain the book at any price. Add to them the local Doctor and Funeral Director and the cast of suspects is complete.

Confirming the Professor was murdered proves to be a challenge and gradually as they get to know those associated with the Manor House Belinda and Hazel discover another murder and an intricate web of secrets that leads them to life-threatening danger and finally to the killer.

This fourth mystery provides Belinda and Hazel with another exciting adventure; Hazel being larger than life yet again and Belinda shocked by an event that will change her life.


Neither book is going to break the bank, so do support my friends!

Thank you for posting about our anthology!

I have Brian Kavanagh´s first Belinda Lawrence mystery to finish first - a PDF-file - and I plan to read it soon, but reading a whole novel on my computer screen isn´t the best solution.

Many thanks, Kerrie. I'm very pleased with the interest shown in the new Belinda Lawrence book. So far have had a good reaction.
Cheers,
Brian