An audio book bought from audible.com, narrated by Isla Blair

A short story collection by Agatha Christie first published in the UK on August 4 1997 by HarperCollins. It contains nine short stories, all published much earlier.
The narration is dramatic and makes it very easy listening. The stories were mainly written early in Christie's career, and include a couple of Poirot stories.
They all contain "eternal" themes of romance betrayed, buried treasure, and deception, which Christie was to explore further in later stories and novels. I find it interesting that most of these survived the initial test of time, about 70 years, to be put into this collection, and then another 20 for me to listen to them today.

The collection comprises the following stories

The House of Dreams
John Seagrove, a young city clerk, awakes early one morning in his London bedsit desperately clinging to a dream that has just transformed his life.   The next day at dinner at his boss’s house he meets the enigmatic Allegra Kerr. Falling in love with her at first sight John instantly realises this is the overwhelming joy his dream had foreshadowed but could darker forces be at work? 1926


The Actress (aka A Trap for the Unwary)Jake Levitt can’t believe his luck when one evening at the theatre he recognises the lead actress as Nancy Taylor, a girl he knows a lot about. A story of blackmail and murder ensue! 1923 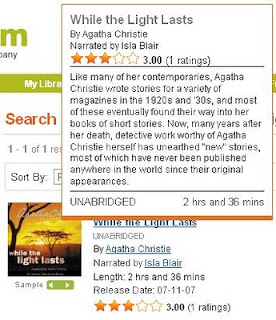 # The Edge see previous blog post
Claire Halliwell lives a quiet country life with her dogs.  A conscientious and popular parish worker, she takes everything in her stride even when Sir Gerald Lee, the man she loves, marries Vivien a glamorous city girl.  When Claire learns that Vivien is having an affair, her sense of duty to Gerald is stretched to the limit! 1927

# Christmas Adventure (aka The Adventure of the Christmas Pudding)
When a priceless ruby, belonging to a Far Eastern prince, is stolen from him whilst he is on a visit to England, Poirot is asked to make a quiet investigation. The ruby was destined for the prince’s bride-to-be and a scandal must be avoided. 1923

# The Lonely God
Frank Oliver returns to England from years of overseas service only to realise he no longer knows anyone there.  On visiting the British Museum he encounters ‘the lonely god’ who seems to be experiencing the same sense of isolation that he is.  Will this strange deity help relieve him of his loneliness? 1926

# Manx Gold
Two cousins, Fenella Mylecharane and Juan Faraker, are engaged.  When their eccentric Uncle dies they eagerly return to the Isle of Man for the reading of the will.  Having grown up hearing tales of buried treasure on the island they are excited when the Will reveals their Uncle had found it.  But where? 1930

# Within a Wall
Alan Everard, a successful modernist painter, is married to the beautiful society girl Isobel Loring who eagerly promotes her husband’s work.  At one of her tea parties, to which she invites the London art critics, she unveils her husband’s latest masterpiece, a portrait of herself but Alan realises the picture is lifeless.  However a sketch he has done of his daughter's godmother, Jane Haworth, is full of life and honesty.  Alan soon discovers that the real contribution Jane has made to their life is not just her artistic judgement.1925

# The Mystery of the Baghdad Chest
Bewitching Mrs. Clayton appeals to Poirot to help exonerate her lover Major Rich, indicted for her husband’s murder. Mr. Clayton’s body had been found in a chest, but who put it there? 1932

# While the Light Lasts:
In the excruciating heat of the African sun George Crozier is travelling with his new wife, Deidre.  They have not been married long and George is aware his wife’s thoughts are with her first husband who was killed in this part of Africa during the war.  In this hauntingly beautiful tale, Deidre is forced to confront the reality of her circumstances: “While the light lasts I shall remember, and in the darkness I shall not forget”. 1924

Kerrie - Thanks for this review, and the reminder of some good stories :-). My two favourites are The Lonely God and The Edge. I like the others, too, but those are my personal favourites.

I thinks it's great that you're so into your niche! My tastes are eclectic but hover around the cozy mystery, suspense/thriller, and historical fiction genres. You have a very comprehensive blog. Thank you for inviting me to post on the Agatha Christie Blog Carnival.

I don't think I have read any of these stories, and the element of travel or exoticism makes several of them sound particularly enticing. You have whetted my appetite for this collection, so thank you!