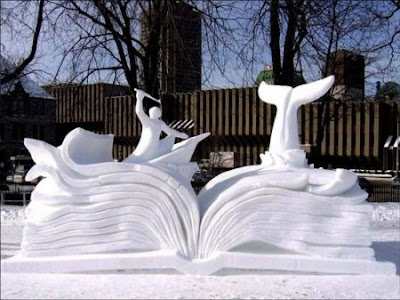 Christmas tree made of books in University Library in Aalborg. [link]

Where is that amazing ice sculpture of Moby Dick done? I'd assume it is in a country where ice and snow last for a good while.

Kathy, I originally found a Google image, but the site where it had originally been was dead. But tonight I found this which appears to be the original: It says the Quebec Winter Carnival: "I spotted this sculpture, Moby Dick, from Mexico, by Horacio Castrejón Galván (captain), Luis Alberto Campomanes Martinez and Hermann Seedorf de Colombres. "

There's a park in our neighborhood with several statues in it - one is of a girl lying on her stomach reading.

I love the one with the bronze children reading!