This contribution to Friday's Forgotten books, being hosted this week by Todd Mason, comes from my records of November 1991. 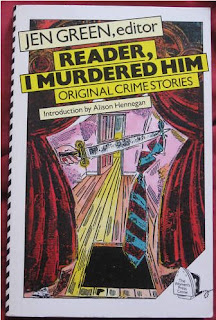 READER, I MURDERED HIM was the title given to two collections of short stories, the first edited by Jen Green and published in 1989. The second was edited by Helen Windrath and was published in 1995. Both were published by The Women's Press.

Blurb from Original Publication from The Women’s Press 1989
My mind went completely blank and I backed away rapidly. "Something’s wrong," I found myself saying. "I think he’s ill…" It was not exactly the word for what I thought had happened to Clarence…
Long-suffering wives, personal secretaries and ambitious editors may all be driven to murder… Sleuths can be hardboiled professionals or the vicar’s wife… And murders range from the premeditated to the entirely spontaneous… Reader, I Murdered Him introduces a host of deadly women as Amanda Cross, Sara Paretsky, Barbara Wilson and many more provide dramatic answers to the problem of the outgrown husband, the office bozo and the holiday bore…

Sara Paretsky's contribution was a short story titled A Taste of Life.
Val McDermid contributed A Wife In A Million.

Kerrie - Thanks for this. Sometimes I really enjoy a short story collection and this one sounds like a good one. Both editions have some really talented contributors, too.

Cool idea for an anthology.

One of them included a story by a woman who'd won a short crime story competition in Company magazine. It was about a woman recently acquitted of murdering her mother - she meets up with some old school friends, and is involved with murder again. Does anyone know the author of this, and the title of the story?

Worthabrowse:
The story you want is The Reunion by Joyce Begg, published in the collection Murder and Company ed by Harriet Ayres and published by Pandora Press 1988. I have a very shabby copy of it.

The story is The Reunion by Joyce Begg, published in Murder and Company, Pandora press 1989.