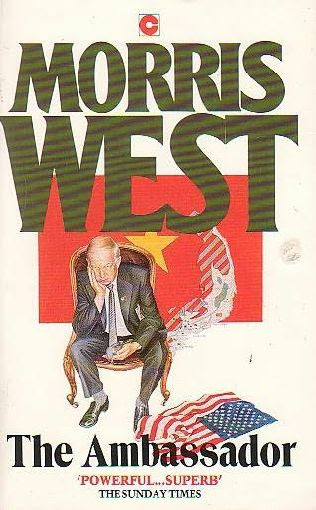 For many of my contributions this year to Pattinase's Friday's Forgotten Books I am going to focus on the books I read 20 years ago in 1992. By then my reading diet was almost exclusively crime fiction.

But there are always exceptions to the rule and today's Forgotten Book is one of those. I remember West as being immensely popular. Wikipedia says that his books were published in 27 languages and sold more than 60 million copies worldwide.

THE AMBASSADOR is an illustration of the fact that 20 years ago many of my reading choices were thrillers.

Morris West (1916-1999) was an Australian author very well known for books that focussed on the Catholic Church like THE SHOES OF THE FISHERMAN which considered the effects of the election of a Slavic Pope.    The Shoes of the Fisherman (1968) was made into a film starring Anthony Quinn, Laurence Olivier and John Gielgud
West also wrote as Michael East and Julian Morris.
His books were often political in tone and a reflection on world events.

THE AMBASSADOR published 1965
Set against the military deadlock in South Vietnam and the crisis of Western diplomacy in the Far East, this novel traces the fortunes of a US ambassador who, in moral confusion and tortured by self-doubt, is made arbiter of his nation's fate, and of life and death for the ruling house of Vietnam.