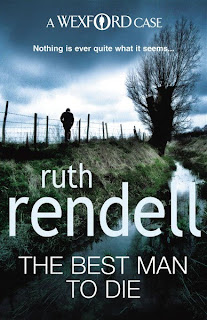 My contribution to Pattinase's Friday's Forgotten Books this week.

The fatal car accident involving the stockbroker Fanshawe couldn't possibly be connected with the murder of a cocky little lorry driver. But was it a coincidence that the latter died the day after Mrs Fanshawe regained consciousness?

Who could have suspected that the exciting stag party for the groom would be the prelude to the murder of his close friend Charlie Hatton? And Charlie's death was only the first in a string of puzzling murders involving small-time gangsters, cheating husbands, and loose women. Now Chief Inspector Wexford and his assistant join forces with the groom to track down a killer . . .

I'm never quite sure whether I have read an earlier Wexford or not. With 23 titles in the series I guess I can be forgiven. Anyway, I have no memory of this story.

I was taken by the description of Wexford in the early pages, because it is so unlike my George Baker (TV) image. I've never thought of Reg Wexford as ugly.


All he needed, he sometimes thought, was a trunk to make him look exactly like an elephant. His body was huge and ponderous, his skin pachydermatous, wrinkled and grey, and his three-cornered ears stuck out absurdly under the sparse fringe of colourless hair. When he went to the zoo he passed the elephant house quickly lest some irreverent onlooker should make comparisons.

This is early in the Wexford series and I think Ruth Rendell is still finding her way, establishing her style. There are passages in THE BEST MAN TO DIE that are a bit floral, over-descriptive, and she still hasn't got to that economy of words that characterises her later books. There's a wry humour though, and what will become a typical ambiguity in the meaning of the title.

Wexford is in his fifties, and already working with Mike Burden. His elder daughter is married and his younger one living at home, still happy to pass her dental bills and other responsibilities on to Pop. There are nice snippets of the tensions of family life.

A lift is installed in the Kingsmarkham police station and Wexford, ever mistrustful of new gadgets, and very conscious of his weight, is of course in it on his own when it gets stuck between floors. Two hours in an airless lift nearly cuts short his career, but typically he sits on the floor and comes up with the solution to the crime.

In this novel Rendell seems to be toying with the idea of expanding the detective duo. Wexford's doctor, Dr. Crocker is a childhood friend, although six years his junior, and Wexford makes use of him a couple of times. I don't remember Crocker having much of a role in other books.

Altogether a nice read, proving for me that the early Rendell novels still have great appeal.

Check this review on Howard's Bookend

Other reviews of Rendell titles on MiP
FROM DOON WITH DEATH
PORTOBELLO
4.7, THE MONSTER IN THE BOX
4.5, A NEW LEASE OF DEATH
4.6, THE VAULT

I remember this one clearly, and I liked it very much though I can´t say I felt very sorry for the victim ;)