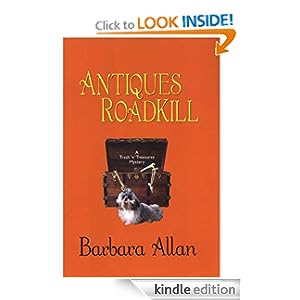 Determined to make a new start in her quaint hometown on the banks of the Mississippi, Brandy Borne never dreams she'll become the prime suspect in a murder case. . .
Moving back in with her eccentric, larger-than-life mother, Brandy Borne finds small-town Serenity anything but serene. It seems an unscrupulous antiques dealer has swindled Vivian out of the family's heirlooms. But when he is found run over in a country lane, Brandy becomes Murder Suspect Number One--with her mother coming in a very close second. . .
The list of other suspects is impressive--the victim's business seems to have been based on bilking seniors out of their possessions. And when the Borne "girls" uncover a few very unsavory Serenity secrets, they become targets for a murderer whose favorite hobby seems to be collecting victims.

The first title in a cozy series around the theme of antiques, ANTIQUES ROADKILL is really a light, fluffy, quick read. A bit of a no-brainer really, although with plenty of quirky humour, and a bit of mystery to stir the little grey cells.

Barbara Allan is the joint pseudonym for husband-and-wife   mystery writers Max Allan and Barbara   Collins.
Max Allan Collins, a five-time Mystery Writers of  America "Edgar" nominee in both fiction and nonfiction categories, has been hailed as "the Renaissance man of mystery fiction." He has earned an  unprecedented fourteen Private Eye Writers of  America "Shamus" nominations for his historical  thrillers, winning twice for his Nathan Heller novels,True Detective (1983) and Stolen Away (1991).
His other credits include film criticism, short fiction,  songwriting, trading-card sets, and movie/TV  tie-in novels, including Air Force One, In the Line of  Fire, and the New York Times-best-selling Saving Private   Ryan.

Barbara Collins is one of the most respected  short story writers in the mystery field, with appearances  in over a dozen top anthologies, including   Murder Most Delicious, Women on the Edge, and  the best-selling Cat Crimes series. She was the coeditor   (and a contributor) to the best-selling anthology   Lethal Ladies, and her stories were selected for  inclusion in the first three volumes of The Year's 25  Finest Crime and Mystery Stories.

So far there 5 books in the series with a sixth to be published in May 2012.

Kerrie - Sometimes, a light, fluffy cosy novel is just the right answer....And I like quirky humour. thanks for this review.

I agree with Margot, sometimes it's a great break between the darker, grittier books I read.