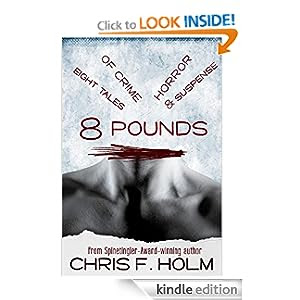 These eight tales run the gamut from small-town horror to old-school, whiskey-slugging noir, with a touch of coming-of-age adventure thrown in for good measure. We're talking over a hundred print pages of pure pulp perfection that'll cost you less than the paper it ain't printed on.

This little collection of pearls is available on Amazon for 99 cents. I bought it over 12 months ago and the title ensures that it lurks at the top of my Kindle library if I'm browsing by title. And they really are enjoyable gems. The beaut thing about short stories is that they are quick to read, almost fitting in the ad. breaks on TV, or just the thing when you are waiting at the dentist's or the doctor's.

Each one of these eight tales is very different, although many of them are written in the first person.
And I enjoyed them all. Often when you read an anthology you find some are better than others. I really couldn't rank these. Each had it's own little quirky twist. If you click on the cover image you should be transported to Amazon where you can sample the first Seven Days of Rain for yourself. The Well sticks in my mind as definitely the most gruesome.

Chris Holm says these stories represent his output 2007 to 2009, and that sadly some of them are now out of print. You may have read some of them:
My rating: 4.3

About the author
Chris F. Holm wrote his first story at the age of six. It got him sent to the principal's office.
He'd like to think that right then is when he decided to become a writer.
Since then, Chris' stories have appeared in a slew of publications, including Ellery Queen's Mystery Magazine, Alfred Hitchcock's Mystery Magazine, Needle Magazine, and Thuglit.
He's been a Derringer Award finalist and a Spinetingler Award winner, and he's also written a novel or two, which are currently out on submission.
You can visit Chris on the web at www.chrisfholm.com.

Kerrie - You've just sold me. I really do like occasional dips into short story collections and this one sounds like a nicely varied and interesting one.

This seems like a new blog set up, but where is the link to "blogs I follow," with the 30 links beloe, including to Mystery Friend Feed, and also those 80 links on the right side?

I, for one, am someone who gratefully, reads all of these at least once, if not twice a day? And it's a real bonus for me.

Thanks very much for the kind review!