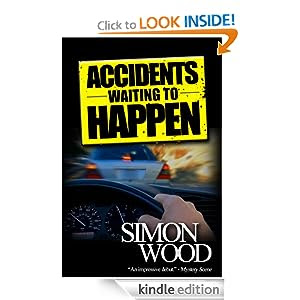 Josh Michaels is worth more dead than alive. He just doesn’t know it yet. He has no idea why someone would try to kill him, clearly that’s exactly what happened.
When an SUV forced Josh’s car off the road and into a river, it might have been an accident. But when Josh looked up at the road, expecting to see the SUV’s driver rushing to help him, all he saw was the driver watching him calmly…then giving him a “thumbs down” sign.
That was merely the first attempt on Josh’s life, all of them designed to look like accidents, and all of them very nearly fatal. With his time—and maybe his luck—running out and no one willing to believe him, Josh had better figure out who wants him dead and why…before it’s too late.

My take
This was one of those very inexpensive buys on Amazon and I am not even now very sure who recommended it to me. Although the author is a "transplanted Brit", it is a very American novel, set in a world  where making money however you can is important.

Dexter Tyrrell, Vice President of Pinnacle Investments, has come up with one such scheme, but various factors have reduced its profitability recently, and so Tyrell has introduced another factor, designed to ensure profits go up again. But sometimes human factors, like Josh Michaels. destroy the best laid plans.

Sufficiently intrigued? Another clue- Josh Michaels, strapped for cash, a few years earlier, cashed in his life insurance policy, for a fraction of what it was worth. Or at least that's what he thought he had done. His best friend Bob is his insurance agent, and Bob, on Josh's behalf, made a viatical settlement.

Married now for a number of years, Josh has not always been squeaky clean in either his business or sexual life, and now these elements are coming back to bite him, adding to the complexity of the plot.
This is a thriller with many interesting elements.

Other reviews to check - Reviewing the Evidence - although beware that some of these will reveal more of the plot than I have.