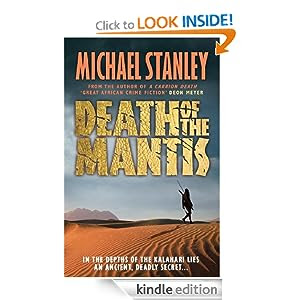 The third novel in the fantastic Detective 'Kubu' Bengu crime series is set in the southern Kalahari area of Botswana - a place full of buried lost cities, incredible hidden wealth, ancient gods and, for thousands of years, home to the nomadic Bushmen.

When a fractious ranger named Monzo is found dead, fallen into a donga - a dry ravine - surrounded by three Bushmen, the local police arrest the nomads.
Detective 'Kubu' Bengu is on the case, which reunites him with his old school friend Khumanego, a Bushman and now an advocate for his people. Khumanego believes the arrests are motivated by racist antagonism from the police, as the Bushmen are claiming that they were at the murder scene because they were trying to help.
Soon after Monzo's death, Detective 'Kubu' learns of another case involving two botany students on their way back from a specimen-collecting trip but who were later found dead, seemingly poisoned, at a campground. Could the deaths be connected?

I have realised as I write this review that I have missed out on reading #2 in this series (THE SECOND DEATH OF GOODLUCK TINUBU). I reviewed the first A CARRION DEATH in 2010 and really did mean to read #2 - I'm sure I have it somewhere..

I have really enjoyed DEATH OF A MANTIS. 'Kubu' Bengu has grown dramatically in stature as a detective and is held in high regard by the Botswana police force. Kubu still acts impulsively, makes decisions that are not always wise - in fact one puts his life in great danger. But now he has family responsibilities: a wife, a baby girl.

DEATH OF THE MANTIS is one of those books that makes the reader think. For a start - who is "the Mantis"?  One of the themes is the conflict between modern Western-style life and the indigenous culture of the Bushmen of the Kalahari. How far will the Bushmen go to preserve the old ways, to keep the sacred places hidden, and yet at the same time how do they pass on their culture?

Kubu is torn because one of his best childhood friends is a Bushman although Khumanego says he is trying to preserve the old ways by being an advocate for his people.
There are many reminders too that this is a dangerous land that Kubu is living in.

DEATH OF THE MANTIS is tightly plotted, has excellent character development, as well as passing on to the reader a great depth of information about Kalahari life. There's an interesting juxtaposition of technologies too - old maps and records, overlaid by GPS printouts.

Check what the authors have to say about the background to the book. You can also read the Prologue and the first chapter there.

Other reviews to check
If you are looking for a reading guide, there are 10 questions here.(pdf)

Awards for DEATH OF THE MANTIS

I liked this book too. I have liked all the Michael Stanley Kubu Bengu books.

Kerrie - You've reminded me that I must catch up with this series! Kubu Bengu is a good, good character. I'm glad you enjoyed this one.

We're delighted you liked Death of the Mantis so much. Thanks for the review!

By the way, the second Detective Kubu novel is called A DEADLY TRADE in the English edition. THE SECOND DEATH OF GOODLUCK TINUBU is the title of the US edition of the same book.